It was still warm, with temperatures in the mi 50's on Thursday morning. The forecast was a cloudy day and rain moving in for the afternoon. (However, the day remained partly cloudy with warm sunny spells and temps in the 60's. The rain didn't come until after 4 p.m.)

It was the morning after the workers party and some moved a little slower that normal. A gourmet meal and lively band provided an enjoyable evening for all. It is usually a well anticipated event.

Remaining contestants hoped for some type of weather/light/luck change that would benefit their dogs. The test had provided considerable separation at this time and they had overnight to think about it.
It was estimated that it would take two hours to complete. 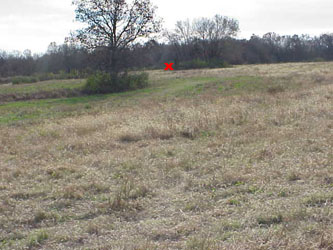 Test 6 - Land Blind
A land blind was quickly set up from the same line. It went through the right flyer mark to the right of the first brush lined tree to the left tip of another patch of trees and brush about 275 yards away. It was a hen pheasant marked by a red stick.

It was very do-able and only a few had difficulty. It began at 10: 40 with dog 14, took about 2 minutes per dog and was completed by 12:15 p.m. Only one dog, #63 was dropped leaving 35 for the 7th.
Test 6 - Water Triple with Retired Gun
A move was then made back to the dike where the first test had been held. It was ready when judges arrived but had to be reorganized due to a wind shift and would be a water triple.  After some significant trimming  (including cutting small trees) on a cattail covered point, an in line triple emerged. The line was on top the dike, but a bit farther back from that of the first series. It faced the same land /water area also, but more of the irregular left shore and water was visible. To the left, on the near side of a cattail lined creek, a set of flyer guns shot a flying duck which fell on the far side landing in grassy cover about 100 yards away. A second set was stationed on the left cattail lined shore at the base of a peninsula protruding into the lake from the left. They threw a dead duck angled sharply back to the right. It arched over a small bay landing on the cattail covered shore 115 yards out. Deep to the right, on the distant shore of the lake a third set threw a dead duck flat to the left that landed on the brushy shoreline about 308 yards from line. The order was: Far right, middle, left flyer. As the dog was sent for the flyer, the far guns retired into the tree line behind them. About 1:30 Marty and Paco demonstrated that the far bird was difficult to remember and handled.  It took about 12 minutes to complete. By 2 p.m. dog 21 initiated the test. The first several dogs handled and one picked up, but then the wind switched a bit and work improved. The left flyer falls were varied and a number of dogs hunted the near side of the creek and/or drag back before recovering it. The middle bird lay across a small bay and some dogs hunted the peninsula or woods behind it before locating it. The most challenging mark was the long retired one. To recover it, dogs had to swim past the larger bay to the right of the middle guns, skim the tip of the peninsula , cross a wide, cut cattail point then swim/lunge a good distance to the far shore. Some dogs checked out the tip of the peninsula, or hunted the wide point beyond where drag back could hold them in there. As the test progressed, dogs began to run down the left shore beyond the point and hunt their way to the bird. About 3:30 it became very cloudy and rain began shortly after. Because of the dark conditions and rain , the test was suspended after dog 69 had run. It will resume on Friday with one test dog at 6:45; first running dog #72 no earlier than 7:00. No partial call backs were given.