Test 5 -- Land Triple
Today’s test sites are sponsored by Maple Leaf Foods. We thank them for their support.

When the competitors and workers woke this morning, they were relieved to realize that the fog wasn’t just from last night’s activities. There was a very thick fog that delayed the start of the test.

Purina sponsored a breakfast for the competitors and workers. They enjoyed pancakes, sausages and coffee prepared by the lunch wagon. 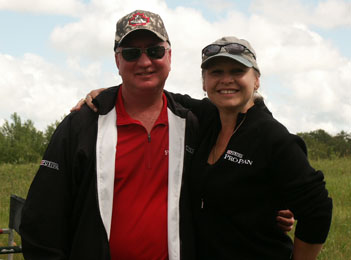 The Purina Reps
The caravan left the campground at 9:15 AM. The sky was overcast and there was still some fog. The wind was light out of the west.

The judges had a land triple set up but reduced visibility was affecting the test so badly that it had to be scrapped. It had started to rain at 10:30 AM.

The new test was also a land triple with an honour. They moved the test to a piece of club land directly to the north of the 1 st set up. 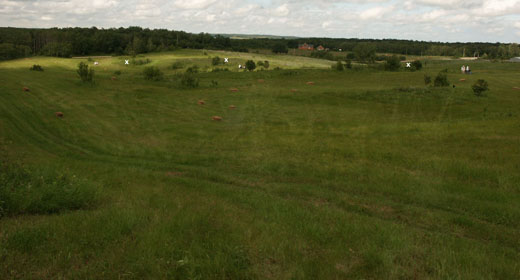 Test 5
The test was a stand-up in-line triple shot left to right. The right bird, a drake mallard was thrown left to right into buck brush at 250 yards. The center bird a hen mallard was thrown right to left at 220 yards. The line to this bird was also through buck brush. The right hand go bird was a hen mallard thrown right to left into heavier cover at 125 yards. The terrain had considerable roll and was bowl shaped. The honour was to the left of the running mat. 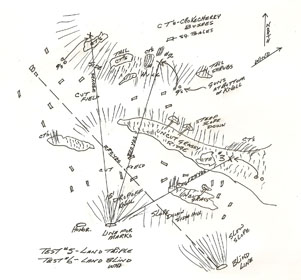 Tests 5 & 6
The male test dog, TOUCH OF CLASShandled by Neil Hunter came to the line at 12:20 PM and had a hunt on the left bird. GUNSTOCK’S COTTON GINNY handled by P.J. Fitzpatrick was the female test dog. She had to be picked up. They had a 3 rd test dog, FTCH AFTCH FIFTH AVENUE’S ROCKIN’ REBA (female) handled by Marlene Benn. Shehooked the center and left gun stations but came up with the birds quickly. The first running dog, #23 AFC FTCH AFTCH JAZZIME LAST CHANCE V PEKISKO handled by Larry Calvert came to the line at 1:45PM by this time the rain had ended. 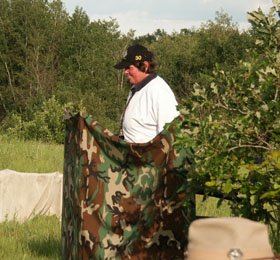 Waiting for their turn
CALLBACKS: Three dogs were dropped, #1, #13 and #25. The marshal announced that Test #6 would be run in the immediate vicinity and that dog #32 would be the first dog to run.
Test 6 -- Land Blind

Test 6
The line was moved about 80 yards to the east for a single land blind at 282 yards. To the right of the line at 133 yards were 2 gunners who threw a poison bird to the right, away from the line. The blind was planted about 3 feet behind a bale.

#3 test dog, GUNSTOCK’S COTTON GINNY(female) handled by P.J. Fitzpatrick got out of sight and could not complete the blind.

The judges decided to remove the poison bird and they proceeded with the blind. The rolling terrain provided many opportunities for the dogs to get out of sight.

The first competing dog, #32 FTCH AFTCH GUNSTOCK’S MACGREGOR OF STONEOAK handled by Charlie Perkins started the blind at 5:20 PM. By this time the sky had cleared somewhat and the temperature rose along with the humidity. The work was generally pretty good on the blind, but unfortunately, there were a few pick ups. Last competing dog finished at 7:00PM. 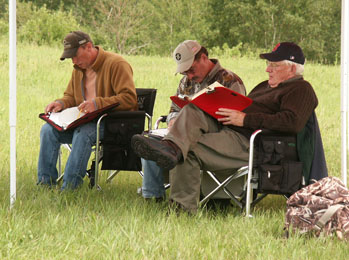 Competitors and workers enjoyed a Burgers and Beans dinner provided courtesy of Delta Marsh Retriever Club. Thank you to all the people who volunteered their time to cook and serve the food.