Sunday afternoon consisted of the vetting of the bitches. Two of them did not pass.

The 2008 Canadian National Amateur Retriever Championship kicked off with a banquet at the Carol Community Hall in Carroll, Manitoba on Sunday evening. 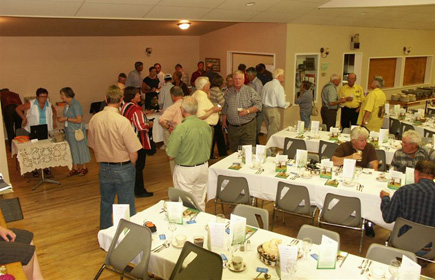 The head table was piped in for the start of the evening. After the MC, Marty Zdan, introduced everyone, the National Anthems of the United States of America and Canada were played. Leading everyone in the singing of the anthems was Gerry Burmaster. Scotty Gillespie proposed the toast to the Queen followed by a toast to the office of the President United States of America given by Liz Jerome. Al Petkau said grace before everyone enjoyed an excellent meal. The dinner was prepared by Plaza Deli, from Souris, Manitoba.

Garry Taylor , President of the NRCC, gave his welcoming address. Nestle Purina rep, Tim Crone, and Eukanuba rep, John Sharpe, were introduced and presented with National pins and thanked for their support and sponsorship. Winchester Arms and Tri-Tronics were also recognized for their support of the National. Marg Murray, secretary of NRCC assisted Garry Taylor in presenting the judges, Ken Crosby, Jim Ling and Graham Bowman with their judge’s pins. Jim Ling spoke on behalf of the judges, wishing everyone well in the trial.

Dawne McKenzie , president of the host club, the Brandon Retriever Club, and welcomed all competitors and guests. Marshal, Ron MacKenzie, gave the marshal’s instructions and the fun began.

Our good friend and Nestle Purina rep, Les Oakes was wished a speedy recovery many times during the ceremonies.

There were 46 dogs entered in the competition, with 3 dogs having to be scratched. The starting dog is Dog # 22 FTCH AFTCH PILKINGTONS CASPER OF MT. GRANITE owned/handled by Gerry Burmaster.

A lively Calcutta handled by Norm Elder followed the introduction of the dogs and their handlers. The evening ended with everyone looking forward to the coming week’s competition.