Test 1 -- Land Triple
Because the first test was just behind the campground, there was no need for a caravan this morning. Activities started early around the campground. The sky had broken clouds, the temperature was 13 degrees Celsius and the wind was out of the west at 17 km/hr. It remained relatively constant throughout the morning. There were a few sprinkles of rain during the morning but nothing of much consequence.

The marshal called the contestants to the line where they had a very picturesque triple set up facing to the north. 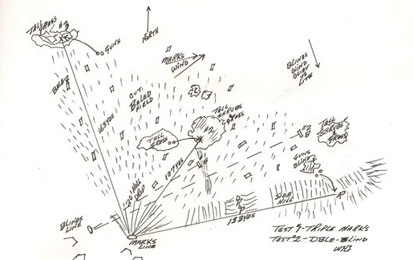 The dogs were capably announced by Annette Leptick and assisted by Elsie Baker. The first test was sponsored by Nutro Products Inc.

Callbacks: All dogs were called back to test #2 which would commence after a ½ hour lunch break.

The marshal announced that dog #31 AFC MOONSTONES HUG AND MOOCHIE would be the first dog to run test two, a double land blind. 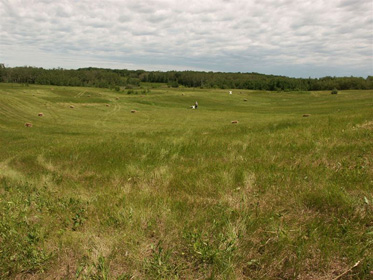 Test 2
The land blinds were run in the same area as test #1, by moving the line to the left. The first blind was a duck at 55 yards placed in front of a hay bale. The second blind was to the right of the short blind. It was a pheasant planted 179 yards from the line.

The male test dog, RAINBOW’S BLUE M&M’S, with owner/handler Al Petkau started the blind at 1:18 PM. The wind was from the north but didn’t seem to be blowing very strong. The female test dog, GUNSTOCK’S COTTON GINNY with P. J. Fitzpatrick ran next. Both test dogs did good jobs with some challenges on the longer blind.

All the running dogs performed very good work on these blinds.

Callbacks: All dogs are called back for Test #3 Tuesday morning. The marshal announced test #3 will be a water triple. The starting dog will be dog #41 FTCH AFTCH REVILO’S CUTTING EDGE with owner/handler Marg Murray. The test will begin at 7:30 AM on grounds #1.

Everyone enjoyed a fabulous rib dinner sponsored by Eukanuba after the tests were completed. 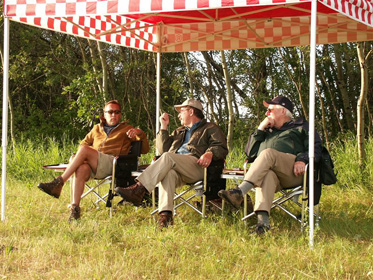