Test 7 -- Water Triple
Today’s test site is sponsored by C & C Rentals. We want to thank them for providing the National with a Polaris – Ranger. The marshals have appreciated the use of this ATV.

The caravan left the campground, following Garry Genaille, the Traffic Chairman, at 7:30 AM to Grounds #1 for the water triple. By the time we left, the light fog had lifted. There was a very light breeze out of the east, the sky was clear and the temperature was 10 degrees Celsius with a forecast of 23.

Purina sponsored a breakfast for the competitors and workers again this morning. Everyone was treated to pancakes, sausages and coffee prepared by the lunch wagon.

Test 7
The seventh test was a water triple. The triple was set up with the running mat on a knoll. The left go bird was a hen mallard thrown left to right at 165 yards, landing with a splash. The centre, second bird, a drake mallard, was at 245 yards on a side hill thrown left to right. The memory bird, a drake mallard, on the right was thrown left to right at 274 yards. This bird also landed with a splash. The gunners for the memory bird were retired. The dogs had to traverse a body of water with an island on the line to the second, middle bird. The memory bird was through a body of water about 50 yards from the line, then over a berm of land approximately 20 yards wide and finally down a long piece of water with an angle shore on their left. 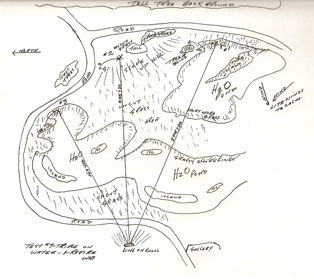 Sketch of Test 7
The first test dog, FTCH WIN-TOBA’S TWIST OF FAITH (female) handled by Gail Komadoski ran at 8:20AM. Lottie had to handle on the centre bird and then did a good job on the memory bird. She took 15 minutes to complete the test. The second test dog was PILKINGTON’S POWER STRUGGLE (male) handled by Jill Richardson. This dog had a small hunt on the centre bird, exiting the water left of the line, but, was able to recover quickly.

The first competing dog was #41 FTCH AFTCH REVILO’S CUTTING EDGE handled by Marg Murray. Hecame to line at 9:00 AM.

The marshal announced that dog # 12 FTCH AFTCH OTTERCREEK’S GRYPHON handled by Larry Baker would be the starting dog for the eighth test. 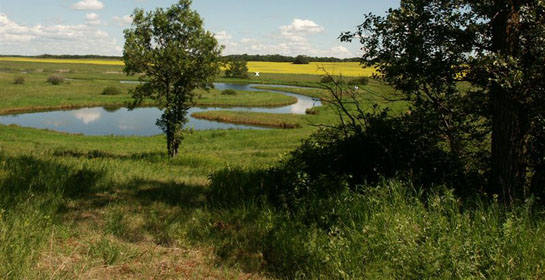 Test 8
The judges had a water blind set up at 300 yards. To the right along the shore were 2 gunners who fired a double dry pop. There were 3 points on the line to the blind. The blind was planted approximately 50 yards past the far shore. There was a stand of trees just to the left of the line on the far shore that created problems for some handlers. The blind was run towards the SE and the wind at approximately 10 km/hr was from the east and then switched to the south east.

The first competing dog was #12 FTCH AFTCH OTTERCREEK’S GRYPHON handled by Larry Baker. He came to line at 4:45 PM. There were some very good work on the blind, but it appeared that a number of the dogs had difficulty picking out the handlers. Unfortunately, some dogs were lost on the far shore behind the stand of tree.

The last running dog completed the test at 7:15 PM.