The performance put on by Brett Kissel Tuesday evening was amazing. He has been nominated for "Rising Star" for next year's Canadian Country Music Awards. It was enjoyed by all and a tremendous opportunity to see this new star. Big thanks to Eukanuba for sponsoring this event. 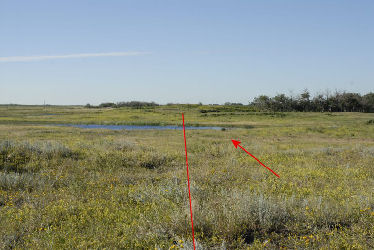 Test 4 - Water Blind
Wednesday morning arrived, looking to be another perfect day of weather. There was a breeze blowing from the west and temperatures rose to 21 degrees by 10:00 AM. Hopefully, the thundershowers would hold off today; yesterday’s test had been completed just in time.

Test 4 was in the same vicinity as the water marks, running from the top of the mound where the left-hand gunners had stood. It was 277 yards in length, but mostly land so the test took about 4 ½ minutes per dog.

The initial line was a slight “no picture” for the dog, as they could not see the steep embankment they would need to run down, about 50 yards out from the mat. Dogs either wanted to run down the gentle slope to the right, or square off to the left. Early whistles were common.

Once the dog entered the pond, they disappeared out of sight for a short time. The judges had indicated they wanted the dog to be put through the bulrushes on the far side of the pond, rather than the two opening slots on either side. Once up on land back of the pond, whistles were needed to keep the dog fighting the slight crosswind. Most dogs came at the blind from the upwind side, as at the end the terrain was pushing them right.

Some very good jobs, but the average was about 8 whistles. This test will be completed in a timely fashion and then it is expected there will be land marks.

Test 4 was completed at 12:20 PM. A caravan moved a short distance over to the next field which had been cut with a few bales remaining in it. Callbacks were given by the marshal, Tom Murray at that site. 6 dogs had been dropped from the fourth series, they were: 6, 26, 38, 51, 65 and 76. Starting dog for the fifth series would be dog number 39.

Set-up for this test took longer than expected and it will not get done today due to the workers’ party. It was scheduled to shut down after dog 73. 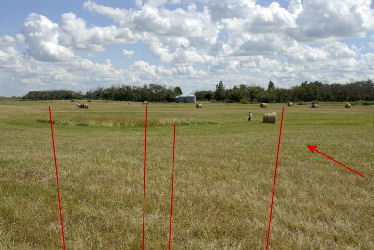 Test 5 - Land Quad
The fifth was a land quad with two retired guns. Order of throw was long left mark (drake) at 277 yards shot first, then short retired right mark (drake) at 85 yards shot second. Outside left retired mark (hen mallard) at 190 yards was shot third and last bird down was the outside long station at 208 yards (hen mallard). After the marks were picked up, the handlers moved over to the left mat to honour.

The first test dog had no problem, but the second test dog handled on two birds. The judges moved one gun station slightly. The first running dog started at 2:15 PM.