Series Two & Three: Land/Water Combination Blinds- completed 76 Dogs called back to Series Two & Three Land/Water Combination Blinds, of which 36 Dogs ran on Tuesday and 40 today. Series Two, a left Land Blind, and Series Three, a right Water Blind were run concurrently. A poison bird was shot from left to right toward the left Land Blind. Wednesday weather was sunny and clear winds ranging from 10-15 mph from the west. Temperatures ranged from lows in the thirties to highs in the fifties. Wednesday was a beautiful day for a retriever field trial. Test dog ran at 6:30 A.M. Dog Number 10 ran at 6:45 A.M. Series Two & Three Land/Water Combination Blinds were completed about 11:30 A.M. Recap: The Land/Water Combination Blinds were run from the west with approximately 40 mph winds from the southwest. The line was located approximately 100 yards from the water and the line to the 207-yard Land Blind was generally along the left-hand shore of the bay which was used for the Water Blind. The line to the 250-yard Water Blind was flanked on the left by the shore (and the line to the Land Blind) and on the right by a long narrow spit which divided the bay from a huge lake on the right. As the spit on the right of the bay ended the line to the Water Blind crossed the end of a point (this land was the location of the Land Blind to the left and the poison bird further to the left approximately 40 yards). The Water Blind was planted on a float 15-20 yards past the point.

On the Land Blind, many dogs were pushed to the left by the water, although some dogs did take some water on their line to the blind. The weather conditions today made the test less demanding than yesterday, but the difficulties of both blinds were a challenge to the dogs and handlers.

56 Dogs were called back to Series 4. Test Dogs ran at 12:45 P.M. The first dog, Dog No. 75, started the test at 1:36 P.M. after more brush was added to hold a bird thrown into the water. The test averaged 7 1/2 minutes per dog, but problems with birds floating away added to the duration of the test.

Series Four was a Water Triple with two retired guns. The dogs were run from a plateau about fifty feet overlooking test test. The first bird thrown was the right-hand dead duck at 200 yards thrown from right to left from a point out into the open water of a huge lake. Tree branches were anchored in the water to hold the bird. The right-hand guns retired to a holding bind hidden by cut cedar branches. The left-hand dead duck at 100 yards was thrown from right to left from land across water to the end of a long narraow island. These guns retired into a holding blind hidden by brush. The line to the long bird was tight behind the flyer station. The middle bird was a shot duck thrown from right to left at 85 yards. 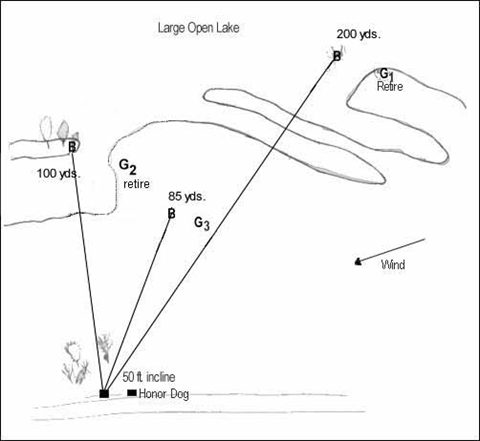 Series Four Water Triple
Almost all of the dogs retrieved the middle duck flyer first, then the retired left-hand bird, leaving the long retired duck for last. Many of the dogs had big and long hunts on the flyer and there were some hunts on the left-hand bird. The long retired bird proved to be very difficult as most of the dogs hunted the point where the gunners were retired and then eventually swam out the the bird in open water. On Wednesday there were three dogs that swam directly to the water bird without going to the point. Four dogs handled and two dogs picked up. And one dog broke on this test on Wednesday.

Series Four Water Triple
The test was suspended at darkness just before 5:00 P.M. after Dog No. 20 ran. Dog No. 16, who had a no-bird, would start Thursday morning, followed by Dog No. 21.

21 Dogs ran the Series Four Water Triple on Wednesday with 35 remaining to run on Thursday morning. No partial callbacks were given.