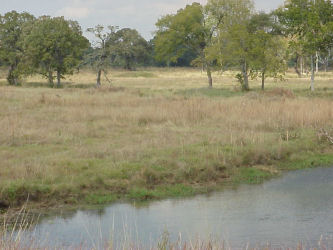 Close Up of Blind Area
It was partly cloudy and  warm with temperatures in the high fifties and a variable breeze.  The test was set up and ready at 6:45 when the only test dog was called to line. After, Judges waited a few minutes for the light to improve before calling the first running dog, #78 to line at 7:18 a.m.

The wind was similar to the previous day , switching left to right across  or behind the line. There were a few handles, several large hunts and a few incredible jobs. The fourth was completed about 11:05 when dog 77 was excused from the honor.

A land blind was announced to be held across the dike in the previous field. It would run from the back end toward the old line site. The gallery was told to wait until it was set up to move. Callbacks would be given at the new site. In a short wile, all were moved and callbacks announced. 40 dogs remained to test the fifth. Those lost were: 15, 17, 33, 43, 53, 58, 64, 70, and 78.

The fifth was a land blind run from the back edge of a dike road. About 75 yards to the left a pair of guns threw a poison duck to the left. Nearly straight across from them a second, single gunner was located on the second of two peninsulas with a boat on dry land in front  of him. He fired a dry shot. The order was: Left, poison bird; right, dry shot. Judges gave the handler an number and he was on his own.

At 12:05 the first test dog arrived, followed by a second at 12.10. Both had numerous whistles. The first running dog, !#18 appeared at 12:26 p.m.. The bird was located deep between the two sets of gunners and marked by a stump like stick about 300+. To recover the duck, the dog had to angle down the dike, take a small piece of the pond corner and continue to the land beyond. The land rolled down, undulated and had two 4' high mounds at different distances in front of the blind - all of which could throw a dog off line. Some ping-ponged between the two guns before clearing them. Some had to be cast into the water..
They could also get behind the mounds and return to sight off line. It was difficult to obtain and maintain a good line. Most early dogs had a good number of whistles. About 1:15, the skies cleared and the wind rose, however, the work remained about the same.
The test took about 5 mpd and was completed  at 3:20 p.m. when dog #13 returned to line.

Later callbacks were posted at HQ. Thirty-eight potential NFC's remained. Those lost: 55 and 79. The next test is rumored to be a land Quad and will begin with dog 49.