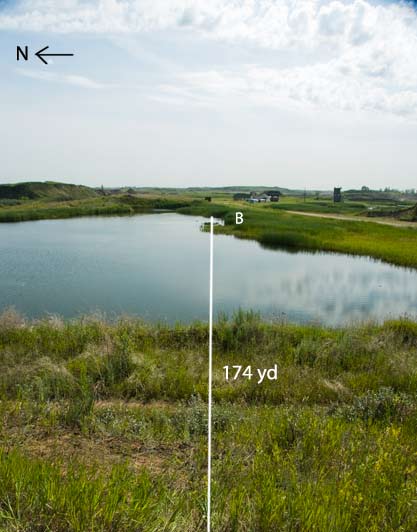 Today’s test is a 174 yard blind, heading east into the sun which will move to the right as the morning progresses.

The start is midway up a hill and the dog must negotiate a steep downhill approach to the water. The water is a large open pond and a bay opens up immediately to the right as the dog enters the water. A straight line to the blind should take the dog parallel to the right shore as the bay fades to a heavily reeded shoreline. There is a flotilla of shorter, new growth reeds extending from the shore partway to the blind with the bird being planted on the edge of a reed bed that is an approximate 50 yard swim though open water beyond the flotilla.

The temperature is already warm at 18*C before 8:00am. There are a few thin clouds and there is no forecast for rain. The water looks like glass with only an occasional breeze to ruffle the surface.

Shade provided by Purina!
The site for the test is a long-abandoned gravel pit which has filled with water, effectively a bowl. The echoes are significant.

The male test dog was Thunder again, run by Doug Hildebrand. At 7:30 on the dot Thunder was sent on the blind and took a line into the reeds. Doug handled him to the left of the reeds, around the new growth then back into the line behind the flotilla for a clean pick up. Ernie Rose the FT Marshal ran his dog Siren as the female test dog and opted to handle Siren to the left of the reeds and back in for another clean pick up.

The test started with dog #28 NAFTCH FTCH FC AFC Northern Dancer II handled by Jim Harvie and the 4th series of the Canadian National Amateur Retriever Championship started ahead of schedule at 7:50 AM.

The early start is due to the diligent work the set up crew of Dave MacDonald, Gerry Leippi, Doug Hildebrand and Tim Fahl – all the necessaries were in place beforehand and thanks to Alan Kennedy (yet again) for donning his waders and planting the blind. Thanks also to Tim Fahl for marshaling this series while Ernie Rose is directing the set-up of the next series slated for this afternoon.

The gallery is in fine form this morning, being sheltered from the blazing sun by stable and stationary Purina canopies(unlike yesterday!). They have almost a “bird’s-eye” view of the test from a cliff side behind and to the right of the start.

The temperature has soared to 28*C this morning, very stifling! The wind has picked up to a ‘gentle breeze’ – just enough to leave you wanting more. The dogs are the lucky ones for now.

Two dogs have been picked up after getting lost in the reeds to the right. For the most part, the blind has been executed well with a few excellent jobs done. The dog work was so well done the series was completed by 12:00 and a crowd developed around the barbeque. 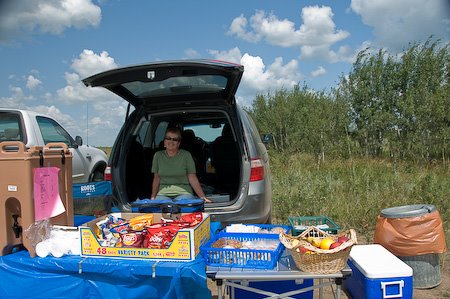 Lunch lady Sylvia
A lunch of burgers and hot dogs with potato salad was enjoyed by the crowd while the judges and set-up crew put finishing touches on the next series. 28 dogs were called back.
Test 5 -- Land Triple 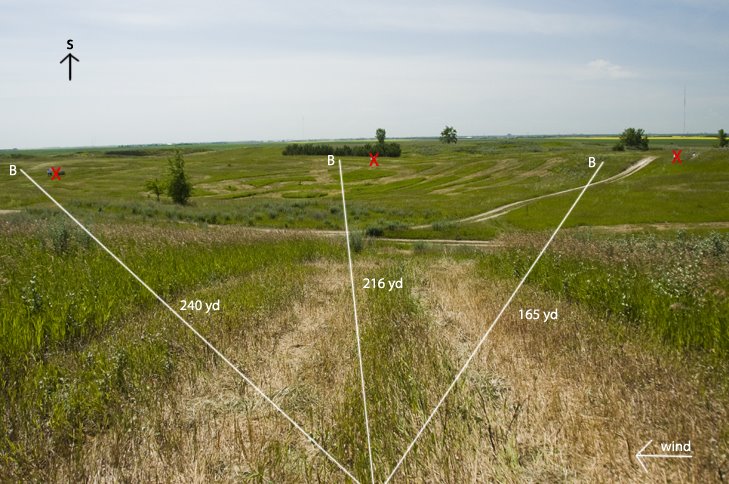 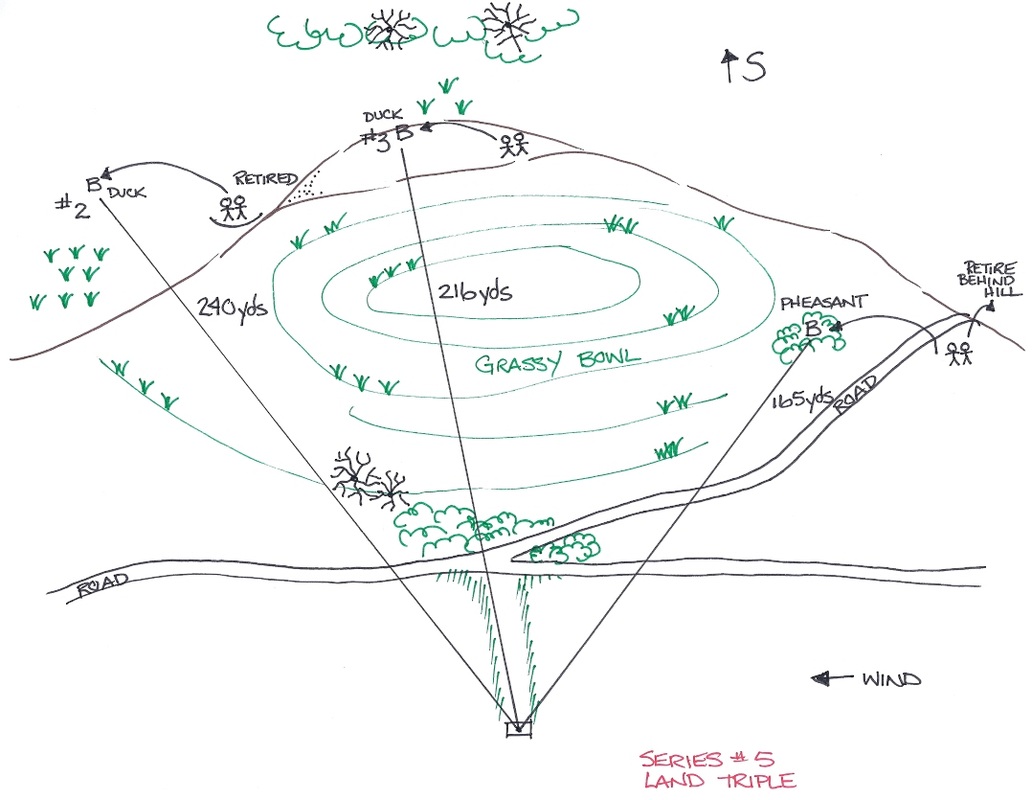 This test is a land triple travelling down then up to the birds, the right and left gunners are retired and there is an honour to the left of the line.

The dogs are starting from atop a hill, facing south, positioned on a mown path in the the grass heading straight downhill. A road runs perpendicular to the road and branches off on the left so that a second road comes into play. The center of the layout is a fairly deep bowl that has been groomed for cover – strips of mown grass alternate with natural state cover. The far rim of the bowl rises then levels out to a flat shelf. The central horizon is a small stand of poplar and brush.

#1 is the right hand station on a hill to the west of the mat. A pheasant is being thrown right to left over a road into moderate cover. The gun retires behind the hill. The line should angle right downhill and over a road at the bottom of the hill, then angles up over a road and up hill to a well-placed bird that is 165yards out.

#2 is the left hand station with a duck being thrown right to left and back. The same downhill start but to the east with the line angling left over the road. The dog should cut some moderate cover on level ground then the line takes a dip through a shallow vale to the duck thrown to the rear of a level rise at 240 yards.

#3 is only very slightly placed to the left of the mat and is 216 yards almost straight out down the mown path. A duck is being thrown right to left and somewhat back. The dog must head down the hill and just cut the intersection of the two roads that is populated with heavy cover. Continue the line down the bowl across a flat and up the far rim to the bird which is slightly back from the crest.

The temperature is almost unbearable around 32*C but the wind is more brisk than this morning and is coming from the west. By 12:45 the test dogs were called up, male test dog is Revilo’s Stormin Normin, handled by Jim Borsberry – who did a nice job except for a big hunt for the right hand bird. Marlene Benn with Fifth Avenue’s Rockin’ Reba also did a nice job of the triple as female test dog. The first dog to run this series is #34 Shekon Gahonk Deeogee, owned and handled by Jim Green.

The set up crew has provided a wading pool of water for dogs to cool down at the line before they honour, a lot of handlers have been casting longing looks at the pool as well.
Handlers are using multiple strategies and all of the possible combinations of pick up order have been used with no discernible bests.

The gallery was picked up and moved to the south end of their cliffside from this morning and even under the Purina canopies shade is at a premium. Purina reps Les and Tim are enduring the heat along with the rest of the crowd. And, speaking of sponsors, a warm welcome and heartfelt thanks go out to Ducks Unlimited Canada for sponsoring the finalists gifts. DU joins Purina and Tritronics as gold sponsors for the 2009 CNARC. We appreciate all that the sponsors do and the support they show for our sport. Dogs Afield and Retrievers Online also support the working retriever sports. We also had an active member of the Saskatchewan English Springer Spaniel Club join us to watch the ``big`` dogs run and we would also like to thank the club as a gold sponsor. In the dog community mutual support is common and sponsorship of this event was received from clubs across Canada: the Saskatoon Retriever Club, Sunpoke Hunting Retriever Club, Northern Ontario Retriever Association, Okanagan Retriever Club, Mountain Valley Retriever Training Club, The Delta Retriever Club, Pine Ridge Retriever Club, North Bay and District Retriever Training Club and the Wild Rose Retriever Club.

The right hand bird has decreased in difficulty as the test progressed as the wind picked up a little more and the fall area became more saturated with scent. All dogs completed the test by 5:00. The judges have called back 25 dogs to tomorrows test.

Tonight is the Worker`s Party so the sketches will have to wait.