Test # 4 Water Blind sponsored by Nutro Products
The cavalcade arrived at the test site at 7:30 AM. The wind was light from the NW, the sky was clear and the temp was 15 C. Once again the test was on the MGDA grounds a short 2 minute drive from the campsite. 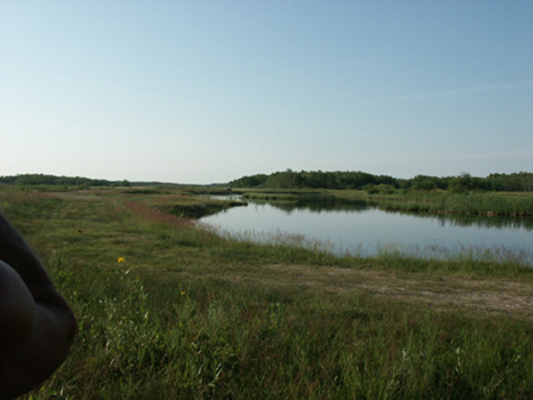 Test 4 - Water Blind
The judges had a water blind set up. The running mat was back from the waters edge by about 20 yards, the line being an angle entry to the water and then parallel along the shore to a point at appox. 70 yards, this point was scented every 10 dogs with a dead duck being dragged through the grass. The line proceeded over this point back into a large bay of water and ran along an island which was off the dogs right shoulder proceeding to the far end of the pond where a dead mallard was placed on land about 2 yards from the shore, total distance of the blind was 198 yards. First test dog ran at 8:02 AM, Revilos Gunz N Roses handled by Marg Murray. The dog did a good job to the point, got hung up briefly on the scent and then handled off the point and completed the remainder of the blind very well. Ed Zeerip with Bluenorth’s Alces Americana ran 2nd test dog. He did a good job to the point but got left after the point and had a challenge recovering the line.

The work on this blind was generally very good, but some dogs had difficulty getting the initial line and taking a direct line over the point .

The average time for the blind was 8 minutes. This made for a relaxed day for the judges and they were able to enjoy a ½ hour lunch break.

By mid afternoon the temperature was very hot at 30 C and the humidity was starting to build. The wind did increase to a moderate breeze by mid-day, but it did not appear to have a significant impact on the work.

Contestants and workers enjoyed a leisurely afternoon preparing for the workers party sponsored by MGDA. The Chairman, Colin McMichael, opened the ceremonies by thanking Nestle Purina, the official Dog Food Supplier for the NRCC., Les Oakes, Tim Crone, and of course Lauraleigh Cameralli. Their support for the 2007 National Amateur is much appreciated and crucial to the continued success of the National Retriever Club. He also acknowledged Iams Eukanuba as another Official Major Sponsor of the NRCC and thanked Dianne Yaskowich and her husband Gerard for their involvement with the trial. Colin also thanked John Sinclair of Tri-Tronics, the official e –collar supplier to the National. Another special thank you went to Winchester, the official ammunitions supplier, to the NRCC for their poppers. The landowners, Ray and Elsa Taplin, were thanked for their continuing support. He also thanked the many local suppliers and all the people who have worked so diligently for many months to make this National the success that it is. The contestants and workers alike enjoyed a excellent meal prepared ably by Stan Scoble and his committee.

Callbacks: #15, #32 were dropped after this test. The marshal announced that dog #40 would be the starting dog to run test #5, a land triple.