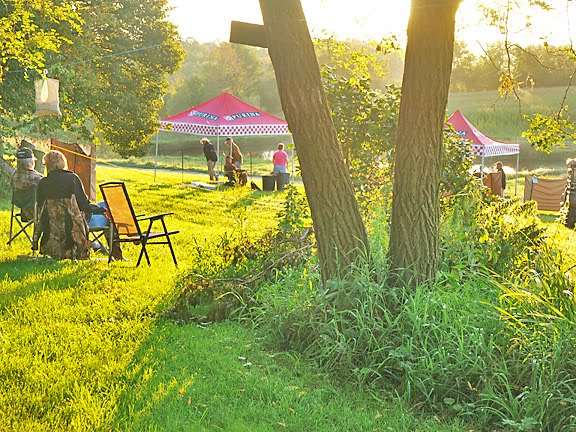 A clear very bright sunny day. We are all on hold at 7:30 am due to a bright light in the east-stay tuned as the water triple marks are delayed.

At 8:00 am the gunners were sent into the field. The test was a water triple set on the double ponds in front of Gahonk Kennels. We’re sitting on a hillside over-looking the valley ponds with standing corn on the far hill side beyond. Far off to the south we can see the islands and bays of Lake Ontario. There is still considerable shadow from the sun as the test remains backlit. The first duck, a drake, is at the end of the pond at 135 yards and thrown to the right. These guns retire. The line to this is mostly land with a swim across a far bay. The second bird is a hen duck in the corner of the far pond and thrown left. The line to this cuts a corner. The last bird, another hen duck at 85 yards is splashed into a back bay to the right, just past an island in the close pond. There was an honour on the left.

Jim Green, ran the first test dog, Hon:sti. He went long when sent for # 2 and crossed the pond to get # 1. Then, went sent for the middle again, he overran, hunted the corn but eventually got the bird. Test dog number 2 run by Gerry Burmaster, was Diva. She also overran the middle bird and got the longest 2nd. Then she hunted backside of the middle before eventually getting it. The judges consulted and changed the test. They took out the middle bird and moved it on land to the left at 50 yards. This was now the number 2 bird and was thrown to the right. The honour was now placed further back and to the left. The 3rd test dog was FTCH AFTCH Pilkington’s Casper of Mt. Granite. Casper did fine on the revised test. The wind has settled in now from the NE making tangle down the pond from left to right. It’s quite cool at 50 degrees with this wind at 15-mph.

Dog # 20 started the 3rd series at 9:10 am. When sent for the short bird, she went deep and eventually hunted back to the long #1 bird before getting the short bird last cleanly. The next two dogs, #21 and # 22 handled on the short left bird. It seems that the dogs want to go long 2nd after the go-bird. The short bird is hip-pocket to the longest and is quite close and exciting. No doubt the handlers will be treating it with considerable respect after the first few dogs.

By 10:00 am we had run 8 dogs. We had several very nice jobs but then another dog # 28 also went a little wide on the short and eventually hunted back to the longest bird across the pond. She did get the short last then.

We've had the first bird change and ready to go at 10:50. The short left bird remains as a concern for most handlers. Here's a photo of the test. 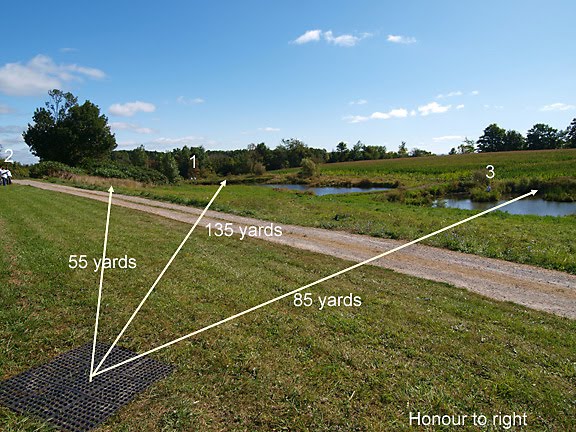 The test has been moving along well with another 30 dogs in the clubhouse. They are all doing quite well now. However, we did just have our first handle as a dog overran the short bird two times. It seems that the scent has built up well enough on the short left bird for most to dig it out. The long bird has certainly had some hunts but mostly all in the area of fall. A few dogs have gone to the gunner’s feet on the go-bird but nobody has had any real problems. The wind is pretty consistent in direction but does vary a bit in speed. We’ve had quite a few no-birds. My dog # 52 somehow survived 2 no-birds in a row. With the mandatory go-back 3 dogs each time, some would save I got my money’s worth. I’ll be reporting back when it’s finished around 5:00 pm or so.

5:00 pm and we're done for the day. Work remained similar although some of the hunts on the long retired were a little sloppier. 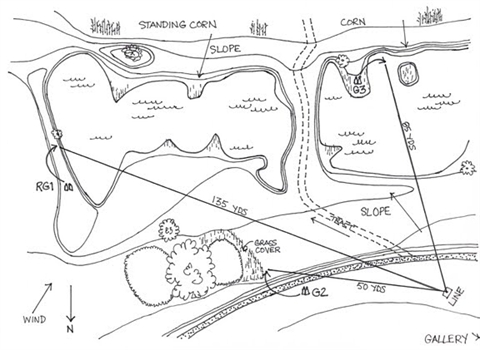 The judges are working on their Callbacks. I'll let you know as soon as I get them. 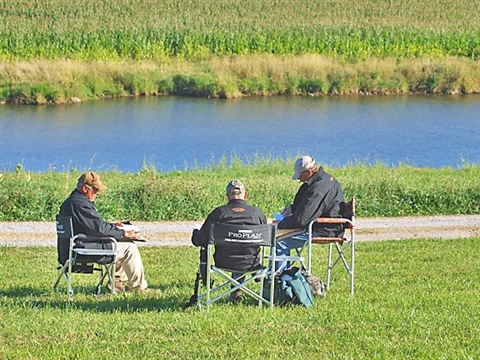 Just in--the weather forecast is unsuitable for the original plans for tommorrow. Now the expected test tomorrow will be near Gahonk kennels at Plumpton Farms. We expect a combined 4th and 5th Series comprising a water blind, a land blind and a mark.