Test dog Inherit The River (LM), ran the test at 7:00 am sharp. The weather is beautiful today, scattered clouds with the winds out the NNW at 0-8 mph. Temperatures early this morning were in the mid 40's but it is warming up nicely. We are looking for high's in the mid to hi 60's for the day with plenty of sunshine mixed in. 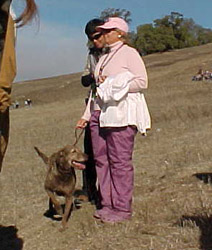 Linda Harger and test dog Yakity
Dog #4 was the first on line and received a no bird. He was to come back in 6 dogs. The remaining dogs ran the 3rd Series and finished the test at 9:00am this morning. Of the 14 dogs that ran, 6 dogs handled. After running the last dog of this series, Dog #19, the trial moved in a caravan to the site for test 4. It was announced that call backs would be given at the next site prior to running the test dogs.

Series 4 - Water Blind
Test 4 is a Water Blind. The line is on the hillside looking towards the south. The dog goes down the hill, over a road about 20 yards from the line, through a dry runoff creek and into the first small water. After swimming the water, he has to go over the dam, back into the water, over the grassy point, back into the water, across and out of the water up the hill to a large rock. The hen mallard is lying on the right side of the rock. The blind is around 235 yards long. The first test dog ran a very nice blind, and both test dogs successfully got the bird. Dog #43 will start the 4th Series. 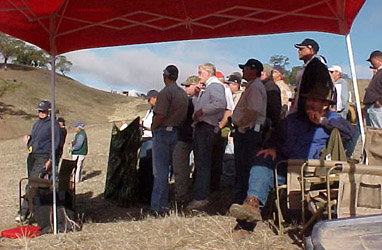 Everyone disbursed from headquarters for dinner and a well deserved good nights rest.