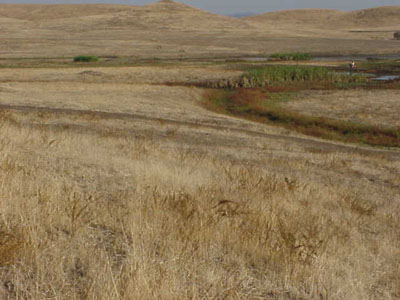 Blinds viewed from red ribbon beyond line mat
It was clear and quite cold, temps in the mid 30's about 5 a.m. Low patchy fog hung over marshy areas. Although Judges wanted to run a test dog at 6:30, the dense fog and glare delayed them until 6:40. After the test team of Willow and Suzanne King (Happy Birthday Suzanne!) the fog rolled back in.

Poor Nan Ruby had ben sent back last night, called to line and sent back again because of the fog. Finally, at 7:30  she was again called to line (#22). Unfortunately she found the results not worth waiting for when a handle was required.

The work was similar to the previous day, however it became quite warm and pleasant, not like the cold and biting wind experienced on Monday. As before, work ran in streaks of very good alternating with handles.

By 2:15, the next series (maybe 2) was ready. It was a double blind. The shorter right one was a dead pheasant on land. The planter sat in a chair to the right of the blind, but did not pop.  It was picked up first. The second was to the left of the first and was considerably deeper. Near the end was the right end of a small pond that had a patch of cattails on the near side. The line to the duck beyond was definitely through that relatively small water area. The first test team appeared at 2:25, the second about 5 minutes later. After, Judges checked to see if dogs could see a white or black jacket better as the sun was behind the line and dogs were beneath the hill. White seemed to be the color du jour and competitors quickly lined up.

The line was located on a grassy side hill that sloped down to the left and in front. It was relatively steep. A light wind came from behind the line.  To recover the right bird, dogs had to angle down the slope, across a small ditch and gravel road to a  dike type ridge that rose beyond. The pheasant lay on bare ground 171 yards from line.

The second (left) blind was run from the same mat, but the angle down the hill was steeper as the hill fell off faster. Handlers were allowed to move up about 15 yards to a pink ribbon once the dog went over the hill. This allowed them to see the dog as it progressed down the hill toward the small pond.

The line was through the pond, then a distance beyond where the duck lay marked by a small, red sprayed hay bale,  294 yards from line.

The right blind took about 4 whistles to recover. There line was actually through the left tip of a large patch of cattails before the rise, but most seemed to go left. There was a danger if the dog ran over the rise and went out of sight briefly .

When sent for the left one, dogs seemed to want to go to the left, possibly influenced by a shifting breeze and avoiding the path to the short one. Some handlers to fight them to the right , then push them left so they would take some water through the distant pond. If they went too far left there, they could be lost behind the cattail patch and reappear off line to the left.

Again, there was not enough time before dusk to run the entire field and no partial callback would be given.The series ended with dog 28 at 5 p.m. It will commence on Wednesday morning with dog 31. Only one test dog will be run at 6:30 a.m.