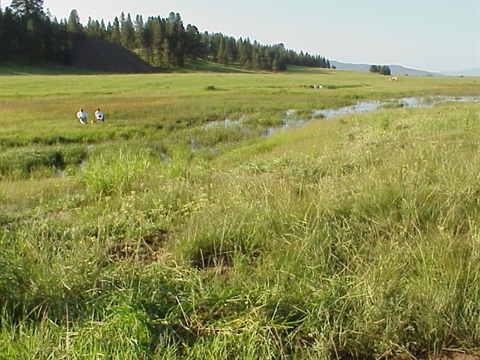 Test 4 from the line  - In Line Line Triple, Retired Middle Gun and Honor
The weather remained excellent despite the ominous warning yesterday. A beautiful clear sunny day was welcomed by all. It was in the mid 50's with little wind. The site of test 4, an in line water triple with retired gun and honor, was located in a field on Paddy Flats road. It was about 10 miles south east of McCall.

The line was near the top of a rise overlooking a channel beneath All three stations were located on the far side of it. The channel widened into a small lake in the distance. Just beyond the the water, a short distance to the left stood a set of dead bird guns. They threw a dead duck to the left where it fell into pasture grass only 38 yards from line. Deeper behind them a bit to the left, another pair threw a dead duck nearly straight back to the right. It also landed in pasture grass above a slight ledge of heavier cover 129 yards out.. The last group was located high on the far hill and shot a live duck well ridden out to the right. It fell  down toward the lake into the reed filled water near shore about 229 yards away. It was also sluiced to prevent diving. The order was long flyer first, middle, retired bird second, short left bird last. The middl guns retired as the dog was sent for the short bird. There was an honor to the right. It took about 10- 12 mpd.

As each contestant contestant came through the holding blind, a note reminded them  of the rule that a long, out of area hunt was to be penalized over a short handle (hint, hint).

The long flyer first excited the dogs and drew their attention from the close, short set.. The configuration allowed them to easily see the retired mark go down, but the sharp back throw was difficult to remember. The short bird was a diversion that dimmed the memories of the previous two marks. Dogs had to cross the channel on the closer two and swim well into the pond/lake to arrive at the far shore where the bird lay.

There was only a bit of hunting on the short bird. Most handlers tried for the middle retired bird second, but not everyone got it second. Some blew by it and recovered the flyer instead. After, when sent for the retired gun, it was easy to miss it and push up the hill behind to "no man's land". most winded the mark, but a few also needed a handle to bring them back .

Early the test was downwind but quickly shifted to coming in toward the line or angled in from right to left. Those conditions allowed dogs to wind the two difficult marks from the left, and at quite a distance, making the marks much more do-able. Occasionally dogs would drive up the hill far to the left of either the retired or flyer mark in a position where they were unable to wind either and a few handles were necessary. A large number of dogs appeared to mark the flyer guns and ran toward them instead of the  ridden out shoreline mark well to the right. Some hunted the no-mans area to the gunner's left for a while before either winding the mark or figuring it out.

At one point a large white sheep dog wandered into the test on the far right and the whole test shut down until the dog, trying to comprehend if the stake was a threat to his flock or just a bunch of weird-o's looking at him. Eventually he chose the weird-o theory , wandered off and the stake resumed.

By late afternoon the wind again switched and blew diagnonally across the test from right to left. With that direction the flyer could only be winded from the water. Dogs that beached early hunted the hill and were unable to wind the bird from there. A number of loose, wide hunts occured.

By 8:30 there were no callbacks as yet. However the 6th series was rumored to be a mixed bag Quad to the north of McCall.