The Purina-sponsored cowboy poetry on Monday night was enjoyed tremendously by all. Robbie Robertson is an ex-RCMP who has been all over the world reciting his poetry. He told stories of the early settlement of western Canada and the Mounties and then moved on to poems about western life in general. Many chuckles and lughter when he would speak about things that hit home to the audience. 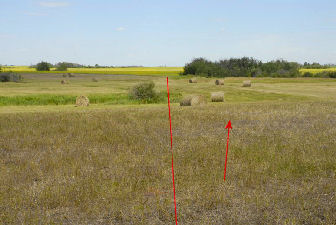 Test 2 on Tuesday
Conclusion of Test 2

The land blind resumed with 2 test dogs running at 7:20 AM. The first running dog (number 27) hit the mat at 7:30 AM and the test concluded at 9:00 AM. The conditions had changed significantly from the day prior, but new elements in the blind became more difficult, which probably made the judges happy. The weather was cooler at around 15 degrees (C) when the first dogs ran. Expected high today will be 22 degrees. The blind was almost straight downwind, so the poison birds were now not a factor. Initial line still gave the same problems, but the most difficulty was at the end of the blind. Some dogs got into the cover on the right side at the end and there were several loose handles. Handlers were looking into the sun and depth perception became an issue. Dogs dropped from the second series were 10, 11, 13, 16, 18, 20 and 35. Only pick-ups were dropped and 63 dogs now remain to vie for the championship. The caravan moved to a new location for the third series water triple. Starting dog will be number 5.

Test 3 - Water Triple
Test 3 was a water triple located in a field with a basin of hidden water. The only obstacle visible from the line was the high bulrushes surrounding the water. Initially, the left mark was across this piece of water, but when the first test dog ran (Sunny, handled by Robin Dean), it was going to take at least 11 minutes per dog. Not enough time in the day to finish, so the judges decided to move that gun station in closer to the line. The male test dog handled by Bruce Macdonald – Max, did the test in good fashion and it looked to be around 7 minutes per dog.

Dog number 5 came to line at 10:52 AM as the first running dog. All three birds gave some problems to the dogs. Some had an extensive hunt on the short mark in the cover, not seeming to wind the bird. Others cheated the right mark, staying dry and hunting deep and to the right of the gunners. Many dogs squared the entry on the middle mark, getting out to the left of the gunners, either correcting immediately to the bird or running deep and winding it as the came back to the area of the fall. The wind picked up and gave a few dogs happy feet. When sent for the right mark, they blew through it and got the long, centre mark. Then the handlers had to work hard to get the dogs back into the right mark. Other dogs overran either the right mark or the centre mark and needed handling to get to the bird.

Handlers and workers headed back to headquarters to enjoy an evening of country music performed by a rising star Brett Kissel. This event was sponsored by Eukanuba. 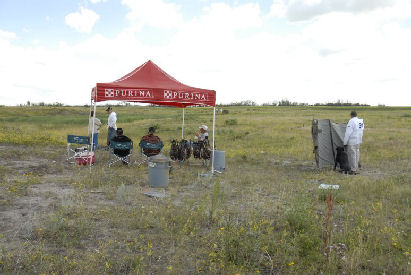