6th Series Land Quad
Early this AM it was clear, cold at 40 degrees and we still had a strong northerly wind. However, by the time the sun was rising it was getting cloudy and the wind had died. But before we tell you about the 6th series, you should know what you missed last night.

Fish Fry
Last night, we had a great fish fry, a Pine Ridge Retriever Club signature tailgate party. The Wall-eye and Rainbow trout were obtained by Jim Green but it was Randy Van Norman and his crew including Wingman Alias Wingding, Peter Thorne that put on the show. They had fries, fish and wings all done to perfection. Folks came back again and again and at the end Randy treated us to strips of goose breast superbly cooked.

Series 6-Land Quad
Upon arrival at the site were greeted with an amazing line set-up. Landowner Jeff McCann had arranged a bank of large square bales behind the judges and in front of the gallery. The Purina tents and line were tucked into an alcove. 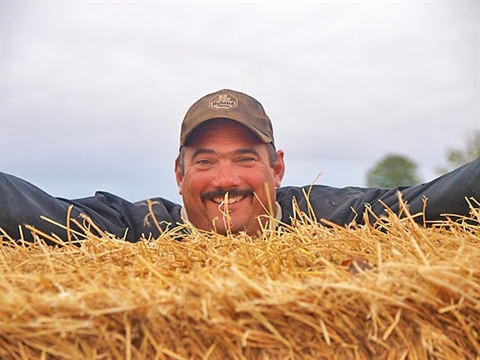 Landowner Jeff McCann behind his alcove of hay bales.
Jeff and Cathy run a large mixed farm operation specializing in market steers. They also use these steers in Team Penning and Ranch Sorting every week and Fiona and I have often enjoyed that with our horses. Kathy used to field trial but now their dogs are cowdogs. I wanted Jeff to run his Heeler, Bull as test dog but he declined! It's landowners like the McCanns that make it possible to conduct Nationals like this on new grounds.A huge thanks from all!

In the large pasture field to the north, 4 gunner stations were placed with 3 of them in an Inline configuration with a 4th to the left. The 3 Inline birds were all thrown to the left and the order was middle, long left, far left and short right go-bird. The two middle gunners retired into well-camouflaged holding blinds. All birds were mallards. The distances 110, 160, 215 and 295 yards (see photo) There was an honour on the left.
The first test dog, Diva, picked up the inline first, from short to long before getting the long stand up last. It was clear that it was easy to drive deep on the middle retired.

The second test dog, Hon:sti, picked up the go-bird and then went long. On being sent for the middle retried, he again went long and was handled. He got the left stand-up last.

As we started the cloud cover was 100% and a very light breeze from the NW contrary to the forecast which promised NE swinging to south..
The first dog came to line at 8:15 am. The test soon started to take it’s toll. By the time we had a first gunner change after 13 dogs, we had 4 handles and 1 pick-up. There were also considerable hunts. Most handlers are taking the go-bird and then the middle retired. There is no consistency yet in which of the longer bird is picked up 3rd. By 10 pm we saw signs of the wind shift to the NE and by 10:30 there was an easterly angle to it although it is still variable. An easterly wind could help the dogs going wide and long for the retireds. We’ll report back in a few hours, as indications are the test is going better for the handlers now. 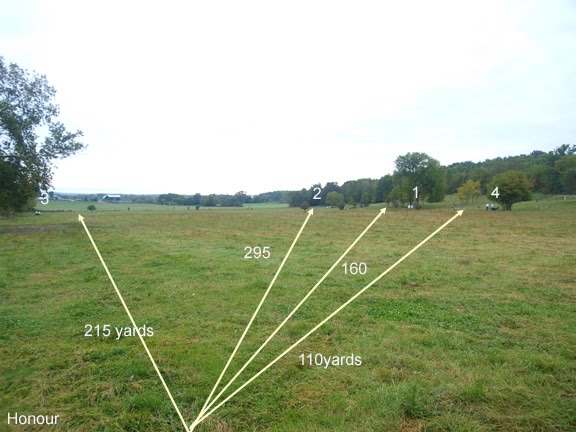 1:00 PM Quick update- We've had 4 more handles bringing the total to 8 plus the pick up. Quite a few good jobs mixed in. The conditions are quite sunny now with scattered puffy cumulus clouds. It's warmer up to almost 70 degrees and the wind remains quite light. It is also variable from the NW, N and NE often changing between dogs. If one bird gets wind saved the next doesn't. I'm off to gun the last rotation so I probably won't update until it's over. 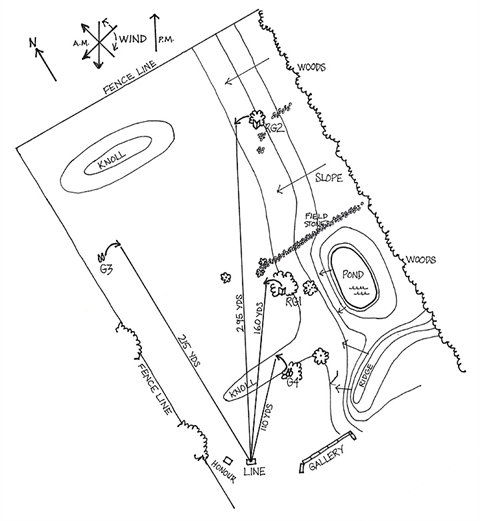 The test finished at 3:30 pm. Work continued to be erratic as we has a few more handles, a few over-run and loose backside hunts as well as a break. Stay tuned for Callbacks.

Tonight we are off to the Worker’s Party in town. That’s the deal about Canadian Nationals –it’s either dog work or party time- either way we like to work hard or play hard.

While we wait for Callbacks here's some snapshots. 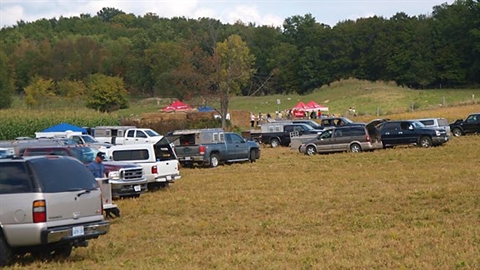 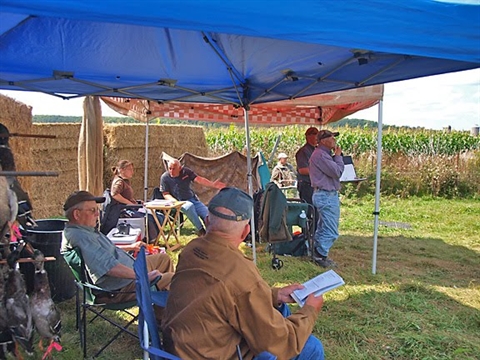 Under the tent of the inner circle

View from the field back to the line 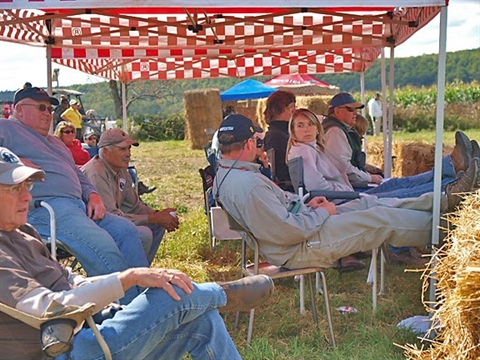