The 6th Series is a water blind, where the line is on top of a hill looking towards the North.  At the bottom of the hill is a road for the dogs to cross. After crossing the road, the dog must cross an open grassy area and enter a pond to the right of a downed log. After entering the water, the line to the hen mallard takes them skimming a point to the right of the tule clump. Angling across the pond to the left side, you swim along the reeds then exit the pond. About half way up the hill is a small log and beside it lies the duck 330 yards from the line.
The wind is blowing out of the NW between 4-9 mph, which would make the wind coming across from left to right of the line.  It is estimated 10 dogs can be run an hour. Therefore, Series 6 should conclude around 2:30 pm PST today.
Due to the visibility from the gallery, we will spend some time in the gallery and with the contestants to get some perspective on the trial.

Dog 49 is coming to the line, which is the 20th dog to run this blind. The first running dog was dog 11. It is taking a little more time than estimated. The wind is picking up a bit to 10 mph and is shifting a little more to the North. The wind doesn’t seem to be having much effect on the working dogs. All of the dogs have picked up the blind so far, so we’ll just have to wait and see what happens.
In roaming through the gallery this morning, there is a distinctly diversified prospective of the trial. Some of the folks here said they have been coming to the Nationals for over 500 years! Well, a big exaggeration I’m sure, but the point being, he’s been present at a lot of the trials over the years and has seen the sport grow and grow. I also met a very nice young lady who has never been to a retriever trial. She has a hunting, dog but has never observed the work of dogs and handles to this caliber. She was in utter amazement and could hardly believe her eyes.

Professional trainers in the gallery were pleasantly surprised at the challenges of the tests, bird placement and terrain for this trial. The dogs and handlers must put forth their best efforts as a team in order to meet the challenge of these well thought out marking tests and blinds. This is the first time this location has been used for a National trial. The change in scenery is welcome and, almost all agree, they get their daily cardio workout just walking up and down the hills!

Here are some photos of the gallery as they watch the 6th Series: 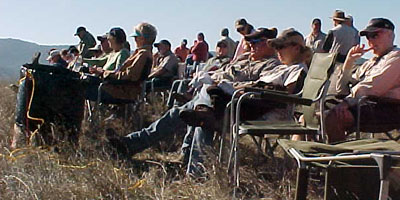 Some of the visitors here at Mead Ranch are just here to see one of their favorite dogs competing at such a high level. Folks are in awe just watching the tremendous work the dogs and handlers are putting forth to meet the challenging requirements to finish a test.

For me, this is my first National stake that I have had the privilege of attending. The work, coordination, and herd of volunteers working together to make the trial run smooth is incredible. Watching all the dogs I have read about over the past few years and seeing people from other parts of the country has been an extremely rewarding experience for me. It makes all the hard work of training, running trials, throwing birds and planting blinds all the more worth it.
Rumor has it that the 7th Series will be a land blind in a new locations. Guess we'll just have wait and see!

Series 7 is a land blind with a dry pop.  The dog is being called to the line and signaling the judge for the dry pop.  After the dry pop, the judge gives the number and you are free to run the blind. The blind is 310 yards from the line and in order to pick up the bird the dog must first go down the hill across a smaller hill, through the tree entrance and up the side hill which has rolling hills. The grade on the side hill is very steep and both dog and handler must work very hard to stay on the up hill side. The wind is pretty consistent at 4-9 mph and is blowing left to right across the test. 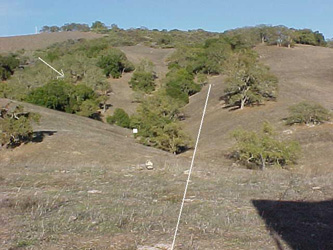 In the photo, the arrow in the upper left hand corner indicates the wind direction. The little white square in the photo marks the origin of the dry pop. The 1st test dog, Cutter, was called to the line at 3:30. He did a nice job and picked up the bird. The 2nd test dog, Yakity, came to the line and she did a very nice job on the blind as well. The first dog to run is dog 23, FC-AFC Small Craft Advisory, handled by Gary Unger.

It is a challenge just getting to the line from the parking lot. The dog and their handlers climb a steep hill around 300 yards before they even get to the first holding blind. Nine dogs have run in the last 30 minutes as the test is running very quick. We have roughly an hour of running time left in the day, so it appears this test will finish in the morning.
Contestants walk to the line on the 7th Series
Have a great evening and we’ll see you in the morning!