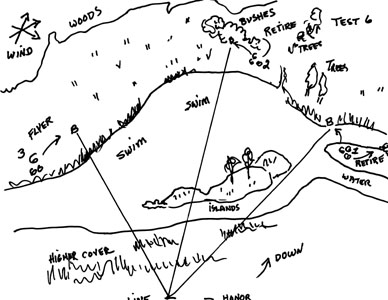 Thursday morning was cloudy and a bit warmer than Wednesday with temperatures in the low 50's.
The 25-30 minute ride went quickly and once on site, the test dog ran about 7:05 with the first competing dog, #65, shortly thereafter. Again, there were a few early no-birds but soon the test smoothed out and the light improved. The test took about 9 minutes per dog.

Varied flyer falls, usually quite wide, made the hen pheasant difficult to locate. As always, a hunt could dim the memory of the other two retired marks. The left mark required a line into and angling across the distant water. Those that squared it or avoided the water could arrive well out of the area. and hunt in "no man's land.  A fair number of hunts and/or handles occurred. The middle bird was also challenging. To recover it , dogs would have to angle down to the water and either take a notch between the islands or go over the middle one. Some dogs went to the right, taking mostly land to the far water. When/if they squared the shore, they arrived behind the guns or deep in front of them. Those behind could wind it if they got downwind, but those deep in front could not, and wide hunts, sometimes close to a switch occurred. Several handles were needed here also. A switching wind would benefit some while it penalized others.

The day grew warm and breezy.  Temperatures were in the mid 70's by noon. At one point the test was suspended until a low, roving helicopter left the area.