Series 4 - Water Triple: completed
56 Dogs were called back to Series 4. 21 Dogs ran this test yesterday with 35 remaining to run today. Thursday's weather was clear and sunny with temperatures in the mid-thirties in the morning and a high of 62 in the afternoon. Winds were 10-15 mph from the southwest. The Test Dog ran at 6:37 A.M.. The first dog, Dog No. 16, started the test at 6:53 A.M. Recap: Series Four was a Water Triple with two retired guns. The dogs were run from a plateau about fifty feet overlooking test test. The first bird thrown was the right-hand dead duck at 200 yards thrown from right to left from a point out into the open water of a huge lake. Tree branches were anchored in the water to hold the bird. The right-hand guns retired to a holding bind hidden by cut cedar branches. The left-hand dead duck at 100 yards was thrown from right to left from land across water to the end of a long narraow island. These guns retired into a holding blind hidden by brush. The line to the long bird was tight behind the flyer station. The middle bird was a shot duck thrown from right to left at 85 yards.
Almost all of the dogs retrieved the middle duck flyer first, then the retired left-hand bird, leaving the long retired duck for last. Many of the dogs had big and long hunts on the flyer and there were some hunts on the left-hand bird. The long retired bird proved to be very difficult as most of the dogs hunted the point where the gunners were retired and then eventually swam out the the bird in open water. Of the 56 Dogs that ran this test there were seven dogs that swam directly to the water bird without going to the point. Nine dogs handled and two dogs picked up. And two dogs broke on this test.

There were several reruns given and no-birds called because the long bird thrown into brush and tree branches in open water floated away from the area. Dogs retrieving that bird moved branches of brush and limbs in the water and they would no longer hold the duck against the strong winds. Near the end of the test the grounds crew added more brush and branches to keep the duck from floating away. The test was completed about 2:15 P.M.

11 Dogs were dropped after Series Four. 45 Dogs were called back to Series 5.

After the Test Dogs ran, Dog No. 11, at 3:15 P.M., started the first Land Blind that was set up for Series 5 followed by Dog No. 12. The judges decided to scrap the test when the dogs apparently could not hear the handlers' whistles. Dog No. 13 was slated to start the replacement Land Blind for Series Five.

Series Five was a 200 yd. Land Blind run from the huge dike at Busch Wildlife Area. Most of the dogs did well on this test; some dogs went into the woods behind the blind before recovering and picking up the bird. 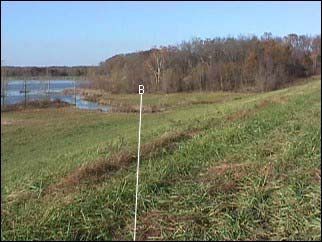 Series Five Land Blind
4 Dogs were dropped after Series Five. 41 Dogs were called back to the Series Six Water Blind on Friday morning.