The workers party had been a rousing success. There was food, liquid libation, a raffle and a good dance band. It was a time to loosen up and enjoy! It went all too quickly and participants left rather early to get the callbacks and other information for the upcoming sixth series.

Another beautiful day greeted the caravan at 6 a.m. as it traveled to the new sixth series site - an in line land triple with a retired gun. Once off the black top road, a narrow gravel road wound its way through Long Lake Ranch for a couple of miles to rough and rolling field. The line was set on top a small knoll and faced a field of sagebrush, barren ground, numerous fallen logs, dead fallen trees and a steep sided pond to it's right. The hill rolled down to the tip of the pond, then rose sharply up beyond. A group of live bird gunners were placed on the low ground to the left. They shot a flying hen pheasant to the right. It landed in grassy cover about150 yards from line. to thee right, about half way up the hill a second set threw a dead hen pheasant sharply back to the left. It landed near or in a small clump of sagebrush nearly 240 yards out. The third station was deep to their right, also on the steep hillside. The shot and threw a dead duck angled back to the right landed behind some fallen logs 220 yards from line. The order was : Right, middle, left flyer. As dogs were sent for the flyer, the right station retired. 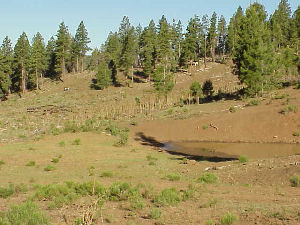 Close up of middle and right gunners
At 7:30, test dogs were invited to try the strenuous series. The first handled on the right mark while the second picked up the birds cleanly. After handlers had balefully observed the line, they began the quarter mile walk down the road to their vehicles. It took a while for the first running dog to appear, but by 8:or, dog 81 stepped to line. She had a running flyer that she chased down and caught in the air (5 extra points?), The test took about 7+ minutes per dog (mpd)

The site was strewn with countless distractions. There were fallen logs and a brush pile on the way to the flyer,. The middle bird had even more of the same but included a strip of 4 - 6' high sparse weed stalks and a mound. The far retired bird bristled with still more obstacles. To recover the retired mark, dogs had to go down a hill to the end of a pond below. The line continued into the water, then up a steep dirt bank beyond. Once past that, they disappeared over a hill an could not be seen for a few seconds.Once up the hill, they had to drive deep, nearly to the top, to wind the duck

Most dogs found the middle bird with minimal trouble but the right, retired bird was a different story. The hill also rolled down to the left and all the suction was in that direction too. When sent for the retired mark some dogs avoided the water and ran toward the middle ground arriving at the "no mans land" between the gun stations. Occasionally they would drive deep and disappear over the hill or hunt the taboo middle area before locating the mark. A few required a handle or two and two were picked up.

It had been very hot and several dogs were wobbly from heat stress when they returned to line. They were prompltly attended to and recovered completely.

While participants were awaiting the callbacks, Judy Greenleaf invited all to celebrate her birthday with a Gi-normous, beautifully decorated cake. Christine Kashevarof cut it into indivdual pieces and distributed to all well wishersle land blind through the marks was on deck for the seventh series to be run as soon as the sixth was completed and call backs were announced. It took about a hour to set up the double land blind. Both were through the previous marks, a short one through the small pond and the long one (from a different mat) under the arc of the flyer. Happy Birthday, Judy!

After the test dogs ran, dog 84 came to line at 4:10p.m. Since he and several following dogs had difficulty being seen at the end of the long blind, the test was scrapped. A water blind was announced for the first test on Friday. It would be back at the Cole ranch where the first four series had been held. Test dog at 7:30, first running dog at 8 a.m.