The Worker’s Party was a big success, not to mention delicious.

THANK YOU from the bottom of our hearts because without all this assistance these events would be so difficult, if not impossible, to hold. We can’t name everyone, someone would be sure to be inadvertently missed, but you all know who you are and please know that you are appreciated.

Purina generously supplied awesome gym bags full of swag to the workers and volunteers as well as dogfood(of course).

There was a raffle and a 50/50 draw held as part of the entertainment. The silent auction was closing, which engendered a few bidding wars, and when the dust cleared the items were awarded to the highest bidder.

Thursday morning judges, workers and handlers enjoyed a hot breakfast of waffles with blueberries and syrup, bacon and scrambled eggs, coffee and juice sponsored by Purina. Then the fourth day of the Canadian National Amateur Retriever Championship began.

Test 6 -- Single Land Blind
The test is set in a large, shallow crater in the prairie. The dog starts from the elevated north side of the bowl across 261 yards to the south slope of the bowl to pick up a planted duck. The bottom is a large expanse of undulating terrain that has been groomed in strips of short and long grass. There is a road that angles from the right down across the front of the starting position and winds around the east perimeter then exits the area to the left of the blind that has a patch of silver willow following the roadside. There is a mown path angling to the right of the initial line and the line crosses numerous mown paths, any of which can entice a dog offline in almost any direction.

The morning is calm and cooler than yesterday. The temperature is about 19*C and the wind is negligible but the occasional breeze is coming from the northwest. It is cloudy this morning and there have been a few dribbles of rain.
Overheard in the gallery………

It’s a good thing the gallery is usually set back from the test because the buzz of conversation would surely be a distraction. Lulls in the conversations generally signal an excellent performance or a dog in trouble, either eliciting the appropriate response.

Here is a small collection of facts and tidbits overheard under the canopy this week:

>the youngest dog running is Taylorlab’s Sugar and Spice(Candy), owned by Garry and Sue Taylor, handled by Sue

>there are 14 female dogs compared to 24 males competing

At 9:30 all had run the blind and were happy to hear the generous judges have invited all who ran the sixth to run the seventh series water triple.

The clouds have thinned out and the temperature is up to 27*C, the wind has also picked up and is coming from the northwest at 20kmh. The judges are utilizing the same abandoned, water-filled gravel pit that series #4 was run in. The starting line is on the north shore at the back of a mounded point, the point is surrounded by tall reeds but they don’t obstruct the dogs view from the mat. The far shore is a wide perimeter of reeds with a small far left point, a central bay area and a right hand reed bed in the shape of a point with the shore behind ascending to a hill crest. There is a road that heads down from the right hill and runs the shore.
Test 7 -- Water Triple 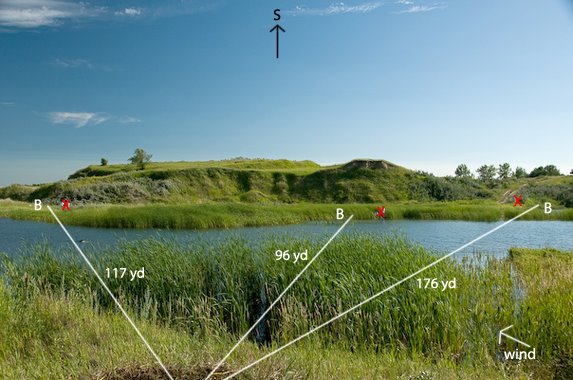 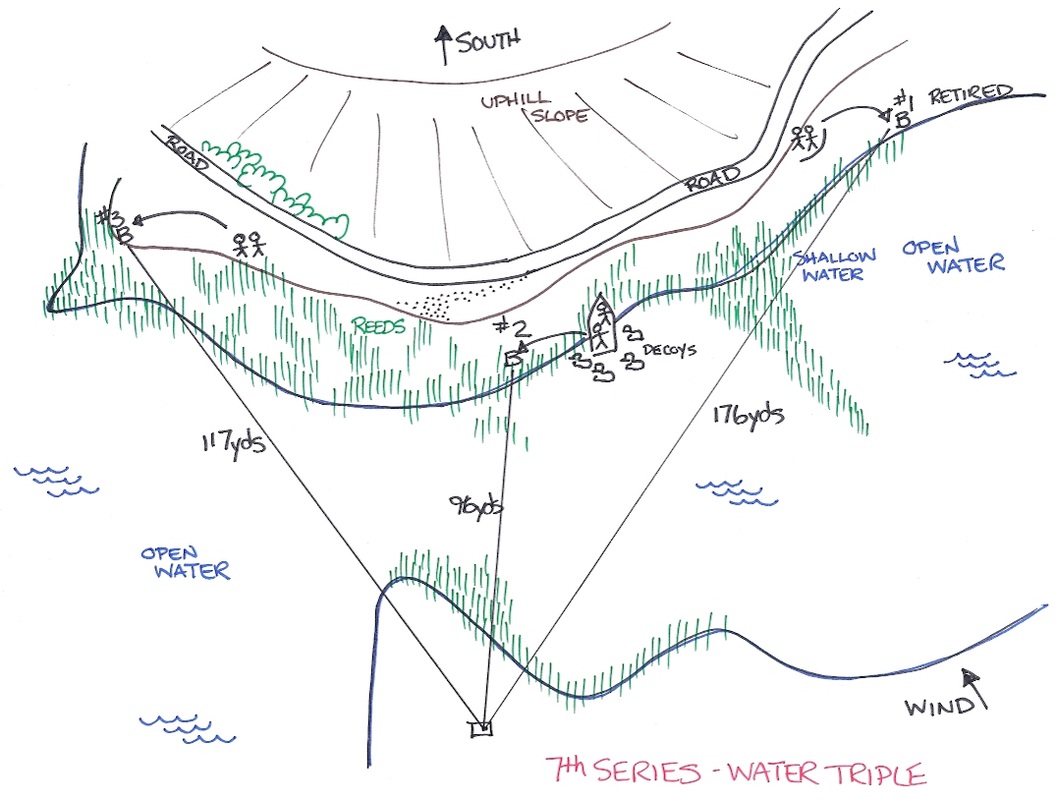 #1 is the right hand station and a retired gun, a duck thrown left to right and down at 176 yards, this is the longest bird. The dog must cross open water and cut a long thin point made up of reeds where the dog becomes lost to view, and land on the shore behind, continue a straight line(back into view) up the right hand margin of a water-side hill to the bird.

#2 is the center station with the bird being thrown square right to left from a boat wedged in the reed edge and the duck landing in the reed edge with a splash. There are a few decoys out in front of the boat. The dog has a short 96 yard swim in open water to the bird.

#3 is the left hand station with a duck being thrown right to left and back towards the back side of the small point. The gunner is visible during the throw then sits down where he becomes partially obscured but is not retired. The dog must negotiate the reeds on the point they are starting from then swim across open water to the reed bed, a straight line will have them angling left into the reed bed and up onto dry land just ahead of where the point joins the shore and should pick up the duck on the far, back side of the point. This is a 117 yard retrieve.

At 11:15 the male test dog ran, Revilo’s Stormin Normin handled by Jim Borsberry. The right duck entailed a big hunt and then a handle to the pick up. No changes were made to the test and Reba and Marlene came to the line. The middle bird required a big hunt due to a right hand fade on the line. Handlers viewed the test from the line.

Dog #11 was the first dog to run this series. Moonstones Hug and Moochie , handled by Bill McKnight (photo below), is last years Canadian National Amateur Retriever Champion.
Along with the handlers bibs from Tritronics the balance of their sponsorship items arrived, the e-collar, the e-release and the bark limiter will be handed to the winning bidders from the silent auction. As well, Tritronics has provided embroidered and personalized shirts for the judges the NRCC president and secretary and some of the CNARC committee members, these will be awarded tonight – many Thanks to Tritronics.

It’s 6:10 and the last dog has provided us with a nice clean run with a fade to the left on the right hand bird which had everyone in the gallery leaning to the right, the bird was picked up and delivered to finish off the 7th series of the 2009 Canadian National Amateur Retriever Championship. Call backs will be posted tonight.