The National Workers’ Party was lots of fun. Workers’ pins and gifts were handed out, as well as more goodies and dog food from Purina for the workers. Silent auction items were sold and all the raffles were drawn. The Tri-Tronics collar was won by Alastair MacKenzie, who was teased that Buddy should be better behaved the next time we see them.

Purina is buying the breakfasts for the contestants starting today.

Two new test dogs ran at 7:30 AM. One completed the marks without a handle, the other dog handled on two marks. Dog 73 had had a no-bird as the last scheduled running dog the night before, so it was the first dog to start the test today.

At first, there was a high percentage of successful completions. The test was more down-wind than yesterday. At about 9:00 AM, the wind swung around more from the west and was similar to yesterday’s wind. Then the handles started happening again. Dogs were missing the short retired mark or the outside left retired mark. Several hunts on the wrong side on the long left visible gun station. 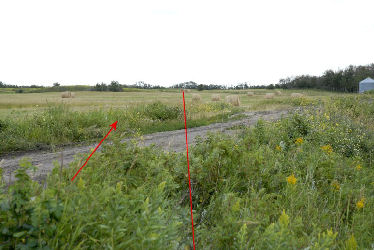 Test 6 - Land Blind
The line for the land blind was moved south to the other corner of the field. It was a no-picture blind, run from the other side of a road in a ditch. Initial line was to angle through some high cover across the road, then taking a slice of a high patch of cover in the middle of the field. The end was tricky, the blind was in front of a bale, with another bale about 6 yards in front and to the right of the blind. Dogs could be seen on the left, but couldn’t wind the blind from that side. Also, the bird was not clearly visible as the blind was planted in some mowed hay.

Bruce and Max ran as first test dog and showed the pitfalls of the test. Dogs could not be seen in the high cover patch. There was greater attraction to the right, where dogs could get behind a bale and not be visible to the handler. Robin and Sunny also ran and had some difficulty as well. The judges decided to make the right side even more enticing by leaving the blind planter visible, sitting on a quad to the right of the line.

The test took about 3 ½ minutes per dog and the first running dog number 56 came to line at 1:00 PM.

At the time of writing, the average number of whistles was around 8-10. There were 2 pick-ups in the first 5 dogs.

It is expected the judges will try and start a water test after this blind. 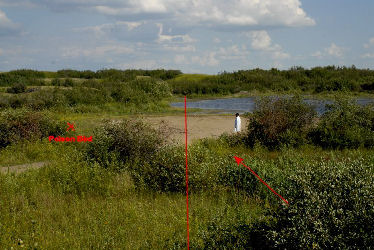 Test 7
The water blind was a duck located on the piece of water near the campground. It was 292 yards in length, crossing over 2 points. When the dog entered the water, he was out of sight for a period of time, so judges had set up a platform using the equipment trailer so that handlers could gain some elevation. The first point at 130 yards proved a challenge as well as the second point at 214 yards.

The first test dog got the bird, but with rough work. The judges decided to spice it up by adding an under the arc poison bird, about 50 yards from the line. The bird fell behind some bushes to another bird that was laying with the wing up, so handlers needed to be careful in that area, as there were 2 birds the dog could retrieve by mistake. The second test dog ran and picked up, so a third test dog was run. This dog got the blind, but with very rough work as well.

The judges decided to go with it and called the first running dog to line at 5:48 PM. The temperature had risento 28 degrees by that point, so the dogs probably didn’t mind getting wet. In the first nine dogs to run, there were 3 pick-ups, 2 dogs that missed one of the points and 1 poor job. The other 3 were passable jobs. The judges decided to hold dogs up to number 36 and release the later dogs to be run tomorrow. Visibility was definitely a factor, as dogs were looking straight into the sun at their handlers and there were often cast refusals.