Pre-trial Activities
The Sunpoke Hunting Retriever Club, host of this year’s National stake, operates from Fredericton, New Brunswick. Fredericton, the capital of New Brunswick, is located about 60 miles inland from the Bay of Fundy on the beautiful Saint John River. All test sites will be within 45 minutes of headquarters; the Ramada Inn. Most of the test will be in the Minto area on reclaimed strip mining sites which have created hundreds of spring fed ponds.

The NRCC meetings, chaired by Jim Ling the incoming president under the watchful eye of Marg Murray, our NRCC Secretary Treasurer approved several important items of business. Notably the National Amateur for 2009 was approved for the Regina Retriever Club from July 20 to 25. The judges will be Ron Graham, Joe Renouf and Dennis Voigt. The National Open for 2009 was approved for the Pine Ridge Retriever Club from September 14 to 19. The judges for the Open will be Larry Baker, Wes Place and Dan Yeomans.

The opening banquet was held on Saturday evening at the Ramada Inn. Participants, judges, club members, sponsors and invited guests enjoyed an evening of fellowship and a great meal. Supper was a buffet of fresh Atlantic salmon, a hip of beef and all the “fixin’s”. The four major sponsors Winchester, Purina, Eukanuba and Tri-tronics were ably represented. John Sharpe (Eukanuba), Lauralee Camilleri (Purina) and John Sinclair (Tri-tronics) spent much of the evening greeting old friends and making new ones. The participants, NRCC and host clubs are extremely grateful for the support from our major sponsors. All four are leaders in their industries and hopefully all field trailers will, in turn, support them. Lauralee and the two Johns were put to work by the club, helping to distribute handlers’ packages. 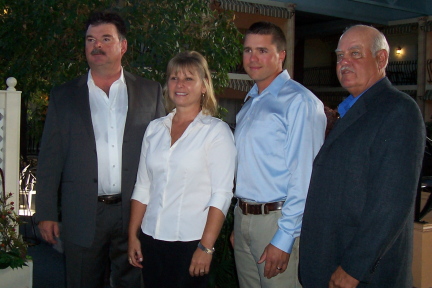 Special thanks was given to Norm and Sheri Hamilton, the landowners who will host the first two series of the National.

The starting dog was determined by draw and it was announced that dog # 2, FTCH AFTCH Gahonk’s Ain’t He Handy would have the honour of starting Series 1. Only one scratch, dog #16 Riveroak Turn Me Loose, has been reported to date. Vetting of bitches is scheduled for Sunday afternoon. Handlers were advised that the caravan would form up on Monday morning at 6:00 AM. Tropical storm Hanna passed through the area on Saturday evening and Sunday morning leaving us with three inches of rain; the good news is that by Monday morning she will have left us well in her wake and without severe damage.