Vetting, Photos and Relax time
Good news -All the female dogs passed the vetting this morning!
Today, official photgraphs are being taken of all handlers by Dona Martin.
All the tests are set and the workers are taking a small break before they start up again tomorrow. 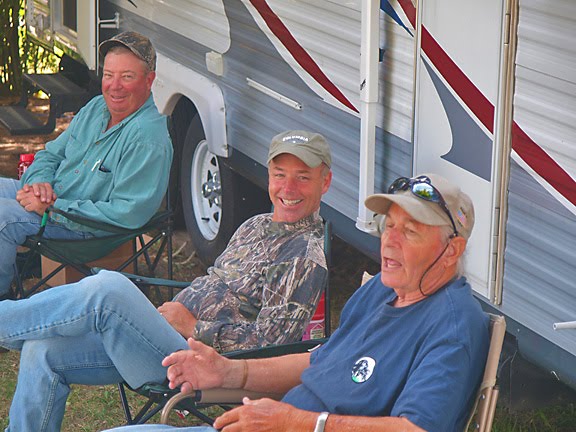 Relax Time! Albert Cole on the left has been at it all week along with Tony Schiller (middle) and PRRC Pres., Don Wilson (right).
Next report-tomorrow morning when we're underway!
posted by Canadian National Blog Team @ 12:54 PM
Opening Banquet
A high-light of Canadian Pre-National activities is always the Opening Banquet-a chance to visit with trialers from across the country again as well catch up on news and begin the excitement of the week’s activities. The Banquet Hall was very nicely decorated by the Social Committee led by Jane Thompson, with help from Diane Ling, Patricia Green, Anne Hall, Barb Hawley, and Fiona McKay. A large collection of Silent Auction items were present. 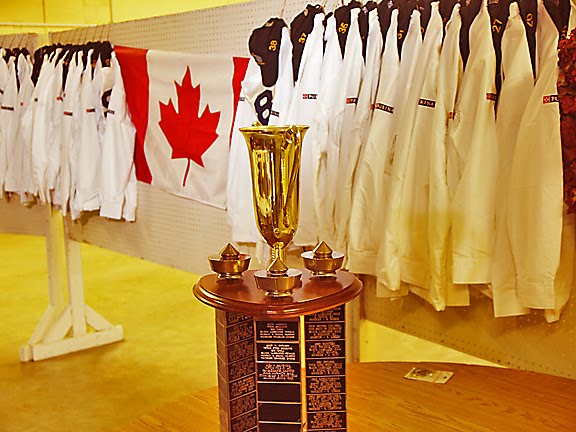 Handlers jackets and hats supplied by Purina and the numbered bibs supplied by Tri-Tronics
waited beside the National Trophy to welcome all to the 2009 national retriever Championship. 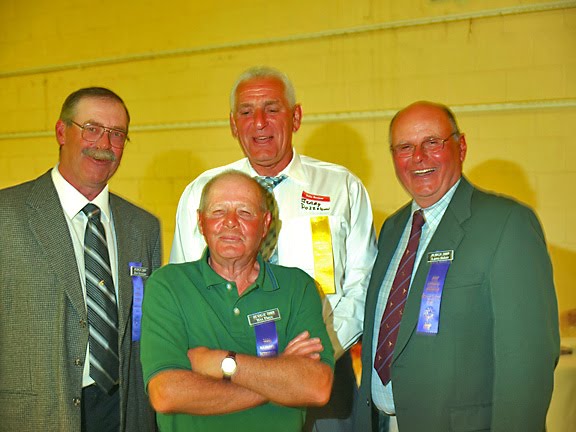 Left to right, Mr. Yeoman, Mr. Place and Mr. Baker with `Pozzy`over seeing all!
Before the judges were excused, we received the Marshall`s Instructions from Gerry. Handlers on the mat for marks, Dogs on the mat for blinds and go back 3 dogs for the first two no-birds before going to the end for a 3rd no-bird-It happens!

After a short break, a lively Calcutta started led by Auctioneer Dave Thompson and assisted by Bill Kennedy. Les Oakes handed out a bagful of goodies from Purina including free dog food. Bill Kennedy introduced each dog for the Calcutta. 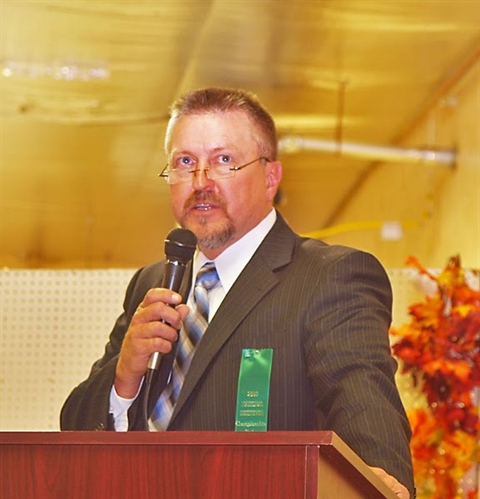 There was an increasing air of excitement as the crowd talked about their favorites. Who had done well this year? Who was training well? Pictured below, Professional trainer, Kevin Cheff, explains to Paul and Alma Lalley that "Quake" was running extremely well. Of course this raised the apprehension level-is he peaking? or peaked!!! 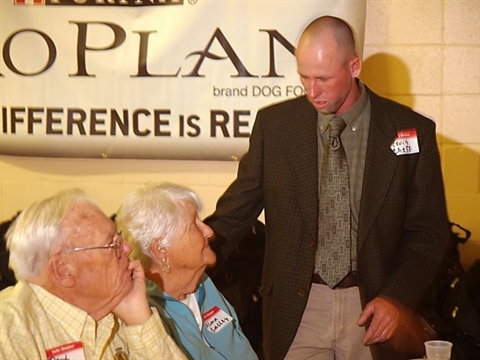 It took a while to go through all the dogs but finally when that was complete, the starting dog was drawn.It turns out that Dog 4, FC AFC FTCH AFTCH Miss T MH, handler by Pete Plourde will start off on Monday morning.
Good luck to all!

posted by Canadian National Blog Team @ 10:42 AM
NRCC Annual Meeting
The National Retriever Club of Canada Annual Meeting was attended by member club delegates and interested trialers. It was chaired by NRCC President Jim Ling, and ably assisted by Secretary treasurer, Marg Murray. After roll call, we received reports from Field Trial Marshall, Gerry Pozzebon and Field Trial Chairman Jim Green as well as a welcome from Pine Ridge President, Don Wilson. All reports indicated everything was going smoothly in preparation for the week’s competition.

Marg Murray presented a proposal from the B.C. Association of Retriever Field Trial Clubs to host next year`s National near Merritt BC from 20-25 September. Field Trail Chairman will be Graham Tyler. It was also announced the judges would be John McBride from Central zone, Richard Dresser from S. Ontario zone and Tom Hawley from the Eastern zone. Chuck Dygos spoke to the 2010 National Amateur to be held by the North Bay and District Retriever Club on 12-18th July. Judges will be Dawne MacKenzie from Central, Barry Grundy from Western and Gerry Pozzebon from S. Ontario. It was also decided that the qualification period would be the two years preceding the trial.

A variety of NRCC business and was dealt with including some changes to 2010 dues, and running dog fess but the entry fees for 2010 will remain at $250. Election of Officers resulted in the following new NRCC executive. President, Gord Benn, 1st VP, Bev Fowler, 2nd VP Fred Benjaminson and Sceretary- Treasurer, Marg Murray. Retiring Directors were recognized and new Directors, Ray Smith, and Dan Yeomans, were welcomed. Dennis Voigt, Corpoate Sponsor Liaison reported on major NRCC Sponsorship contracts that had been negotiated this year. Of note were major 3- year contracts with Purina, Tritronics and Dogs Afield as well as contracts with Ducks Unlimited this year for Finalist gifts, and a commissioned painting for winners for next year by Connie Swanson. Several potential other Sponsors were discussed, including the possibility of Entry Express doing entries and catalogs. This program now worth over $60,000 annually to National host clubs and participants will allow the NRCC to maintain the quality of Canadian Nationals as well reverse some NRCC budgetary deficits in the future.

Finally, a new NRCC position was announced, Communications Officer. Duties are being refined but will include future web reporting like this for Nationals as well as expansion and development of a new NRCC website. Dona Martin was appointed to the position. A huge thank you to Tom Murray who has developed and maintained the NRCC site all these year’s on a volunteer basis. The meeting was adjourned at 3:30 so all could prepare for the Banquet in a few hours.
posted by Canadian National Blog Team @ 8:53 AM
Pre-National Activities
The earliest activity at Headquarters at Gahonk Kennels each morning has been due to the arrival of the judges and set-up crew. They have been busy designing tests since Wednesday as contestants and participants are gradually building in numbers. Most handlers were in the area on Saturday and there were training groups scattered around the country-side. The number of travel trailers at the Gahonk property has been increasing steadily an there is a constant stream of vehicles coming and going as the Pine Ridge Retriever Club members can be seen all over putting the final pieces together. On Friday night there was a NRCC Director’s meeting and on Saturday, both the NRCC Annual Meeting and the Opening Banquet were held, both at the Brighton Curling Club.
posted by Canadian National Blog Team @ 8:51 AM