Pre-National Activities
Sunday, 10th September, started with a clear blue sky and cool North breeze with a definite hint of autumn in the air. After last night’s opening banquet, most competitors tried to relax the day before the scheduled first test on Monday. Today would be vet check for the female dogs as well as handler and dog photos for the 67 competitors. A total of 69 dogs had entered but #46 and #57 became scratches yesterday.

The Saturday night Banquet was a great start for the host Pine Ridge Retriever Club members who had been working hard for many months preparing for this event. After the traditional opening procession led by piper, Connor Cooper, PRRC President and MC Jim Ling welcomed all. After National Anthems and Toasts, we all had a moment of silence for those trialers lost this past year and most recently, Corrine Hunt and Joyce Little. Jim introduced the 3 judges, Marg Murray, Western Zone, Fred Benjaminson-Central Zone and Nancy Fraser-S. Ontario Zone. They had arrived Wednesday to set up tests among the rolling pastoral hills and ponds near Brighton, Ontario on the north shore of Lake Ontario.

After a homestyle dinner, and more presentations as well as reports by Chief Marshall, Dan Yeomans and the judges, the starting dog number was drawn by Carol Brethet and Diana Howard. Dog # 24 was the lucky starter. A lively Calcutta then ensued, led by Dave Thompson, Field Trial Chairman but also well-known for his auctioneer skills. The highest bid went to Jim Swanson’s, FTCH AFTCH Seasides One to Many, top point dog in Canada this year with over 90 points. Next highest bids went to Dennis Voigt’s, NAFTCH FTCH AFTCH AFC Prairiemarsh Madness and Anne Marshall’s, NFTCH FTCH AFTCH FC AFC Comstock’s Bodacious. Speculation was prevalent on who the Finalists would be. Next Report will be Monday night after the day’s tests. A land triple is scheduled for the opener.

Competitors and workers arose to a superb fall day, partly cloudy and quite cool at 45 degrees. Easterly winds had a definite bite and fleece or down jackets were quickly unpacked. The first test site was about 9 km away and the caravan departed promptly shortly after seven. While judges and workers finalized the first test, announcer Lorene Wilson welcomed all. Today was 5 years after the tragic 911 events in that rocked the world. We all joined in a moment of silence in memory of the lost citizens and rescue workers. Trialers contemplated how lucky we are to be able to pursue our passions today.

The honorary test dog was 12 year old 2004 Canadian National Amateur Champion, FTCH AFTCH FC AFC Melmerby’s Maggie Mae, a YLF, owned and handled by Joe Renouf. Maggie was well on her way while the bird was at the top of the arc!
Soon judges called for test dogs to run a land triple facing north in a rolling cut hayfield. It offered scattered clumps of trees and cover patches. A steady easterly breeze crossed the test from right to left.

The right hand station at 174 yards threw a drake duck steeply back to the left along a bush edge and over a strategically fallen tree. The left hen duck, a fairly big swing, was thrown to the right at 166 yards in a patch of cover. The last bird down, a drake duck was in the middle, thrown left at 222 yards. About 50 yards to the right of the middle station was a group of “Bigfoot” Canada Goose decoys. There were two gunners at each station and none retired.

The first test dog was a Male Flatcoat, Hardscrabbles Kaotic Kosmos, owned and handled by Anne Steer from Maxville Ontario. They did a good job so judges changed the order to left, right and middle and retired the right gunners. The second test dog, Moira River Maddy, a BLF, owned and handled by Greg MacInnes of Belleville Ontario also turned in a nice job. Judges decided to not retire the right station and called the first dog, # 24 about 8:20.

The test appeared very doable for the dogs. Some excellent performances were turned in. Some dogs went to the wrong side of either the left or middle birds and hunted before recovering. Others went wide and deep of the left bird. However, most dogs that went wide of either the middle or right bird scented it and had a good mark. Until 11am the right gunners and bird were in shade. This bird was thrown steeply back almost behind the guns but since it was separate from the other marks and bounded by the forest edge, most dogs did well. The test finished at 3pm and callbacks came quickly-all dogs back!!

Before 4pm judges had set up and run the two test dogs on a single land blind. The line was moved 100 yards to the right. The blind was at 275 yards and located between the middle and right marks but just left of a large clump of trees. 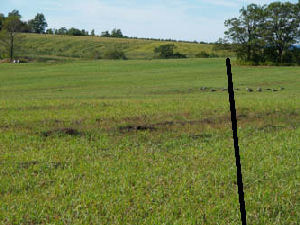 The middle gunners from the first series sat in their chairs while the blind was run. In the valley and half way to the blind the Bigfoot goose decoys had been repositioned. The line was through the middle of them. These decoys were very visible to the handlers but not to the dogs until they had run about 50 yards. The first test dog, Kosmos, showed whistles might be needed early and casting required through the goose decoys. The second test dog, Maddy, however lined the blind. Dog # 38 started and had a good job. Once again there were many good jobs but some dogs really struggled getting through the decoys. A few went right of the clump of trees which was considerably off line. Only a couple of dogs lined the blind but quite a few had only one to two whistles. The test finished shortly after 7 pm. Callbacks arrived at headquarters and 2 dogs were lost, # 7 and 43. The scheduled starting test for tomorrow was a water blind at Gahonk and Nilak kennels.

Headquarters came alive long before 6 am as generators were started and workers arrived for the day’s tests. Before 7am, judges had set up a water blind on the ponds in front of the headquarters. The blind had a 65 yard entry into the corner of a pond and then a shoreline swim over one point before driving up a hill to a duck- a total distance of 166 yards. A gunner sat in white off to the right on the road-they also directed traffic. 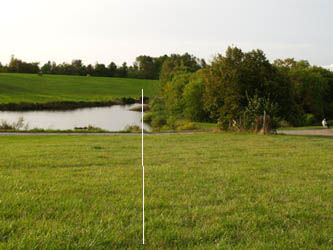 Test 3 - Water Blind
The first test dog Kosmos had great difficulty making the entry. The corner water, shoreline cover, cool temperatures and raw east wind (left to right towards shore) made the entry a challenge. The second test dog, Maddy, got the easier fat entry to the left, but then required a quick whistle to get back on line. After test dogs, judges wisely scented the point since returning dogs crossed it. This made the test more equal for early and late dogs.

The first dog, #53 ran at 7:20 and had a good job. Throughout the test the wind blew easterly although it gradually got stronger. The early sun rise had promised approaching weather and by 8:30, the complete cloud cover, brisk wind and temperatures brought out the heavy jackets. Work varied considerably but many dogs completed the 5 minute test with about 4-6 whistles. The last dog ran at 12:30. Eight dogs had picked up when they ran down the dyke and shore and wouldn’t get in the water. Others had poor work but only the pickups were dropped. They were dog numbers. 19, 22, 23, 28, 35, 40, 45 and 69. 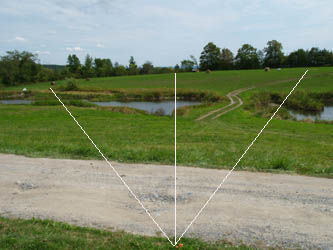 Test 4 - Water Triple
Judges moved the line about 100 yards to the left and quickly set up a water triple. The first gunners on the right were across the pond on the far hill and threw a drake (135 yards) to the right amongst some scattered cut hay. The middle gunners (166 yards) at a round hay bale threw a hen to the left and retired. The last bird down on the left (114 yards) was also across a pond and gunners threw a drake slightly in and to the right. A roadway separated the two ponds and invited “roadrunners to avoid water on the right and middle birds.

First test dog, Kosmos ran at 1:40 and found the road route easier and thus went wrong side of both birds on the far hill. The second test dog, Maddy ran the road once and hunted wrong side on the right bird but took water and got the left bird cleaner. First dog, #66 ran at 2pm and had an excellent job. Generally work was fairly good with a few quick wrong side hunts. There was quite a bit of cheating but also some excellent work when dogs took honest lines to each bird. One dog had handled by 5pm as it became quite evident that the test wouldn’t be finished today. Estimates were that as many as 15 dogs might run tomorrow. Heavy rains are forecast overnight so conditions could be very different in the morning. Meanwhile all will head for The Eukanuba National Party. More tomorrow!

Rain started during the night and occasionally was very heavy. We awoke to misty and drizzly weather albeit a little milder because of the heavy cloud cover. By 6:45 gunners were out in the field to run the last 20 dogs on the water triple. This was a great effort by the workers considering the conditions. Furthermore, the party the night before undoubtedly affected the ease of an early rise.
Eukanuba, an Official Major Sponsor to the NRCC had hosted a National Party that featured fresh pickerel (wall-eye), chicken wings, corn, and French fries all cooked outside in large kettle-pans by Albert Coles and Randy Van Norman. What a feast! Eukanuba rep John Sharpe gave out dozens of prizes to participants. Silent auction bidding was lively and many items were sold off.
Day 3 - Finish Water Triple 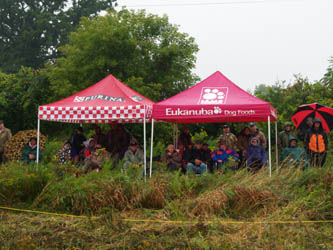