Sunday arrived clear, calm and very cold. Temps hovered around 29 degrees and vehicle windows were coated with a heavy frost. It took a about 15 minutes to travel to the Busch Wildlife area from Headquarters. All cars were directed to parking areas in the lake 34 area near the first series, a land double. 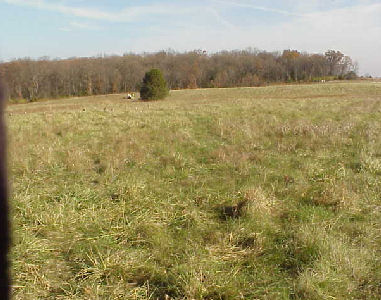 Test One from Line
The line faced a hay field. That rolled down to a swale where a single, large evergreen stood, then back up beyond. It was edged with a heavy tree line that curled from the deep right to closer on the near left. Within two sets of guns were positioned. Both employed three gunners each. The first was deep to the right. They shot twice and threw a dead rooster pheasant angled back to the right. It landed on a sloping hill fairly close to the tree line about 240 yards from line. The second set was to the left,also to the left and past the large tree, closer to line. They shot a flying rooster ridden out flat to the left It fell in the field about 150 yards from line. As the dog was sent for it, the right guns retired into the woods behind them. Also, a group of goose decoys stood in the field a short distance from the line to the left

By 6;45 am the test was ready as the rising sun illuminated the area. Light areas of fog hung over the site as the hoar frost melted off the grass and bushes. Test dogs were called to the line at 6:50 a.m. Announcer Luther Davis welcomed all, played a recording of the National Anthem and the stake began.

Both test dogs hunted on the marks but did not handle. The first running dog, #83 appeared on line about 7:10 am. It took about 6-7 minutes per dog to complete.

The flyer falls varied and pheasants somewhat difficult to wind resulting in a number of long hunts and a couple of pick ups. Both marks were down wind and times and dogs had to get between the fall and tree line to wind them. The long retired mark caused significant difficulty. A wind blew angled back from right to left. That, combined with multiple sets of tire tracks that turned left within the field, nudged dogs to the left, away from a line to the distant, retired mark. If they went too far left, they were influenced by the flyer mark and a few tried to switch. Others held the long line to the far bird, ignoring the wind and tracks. At one point three dogs, 38, 39 and 40 succumbed to the test. There were periods when many did well followed by a few that had trouble in between. Later, judges decided that dog 38 would get a rerun based on the marginal fall of his flyer mark

By mid afternoon, temperatures were in the high 40's but the wind remained cold. Later the wind eased and temperatures topped 50. Some of the layers, hoods and boots came off, only to return about 4 pm.

Most of the remaining dogs did well with a very few exceptions. By 4 p.m. test number one was completed as dog 38 returned from his rerun. Callbacks arrived just before 6 pm. Only the three dogs (39, 40 and 89) that had been picked up were lost. Eighty Three remained for series 2; a land blind in the same area. Test dogs at 6:45 am, first running dog #16, at 7 am