The morning arrived cool and calm after an evening of light rain. After breaking day, the handlers were greeted with overcast skies and a cool 56 degrees. The wind was from the NW up to 10 mph. At 7:09 am announcer Dean Ellis welcomed everyone to the trial and wished the best to all. It was announced the first test dog would run at 7:15am. 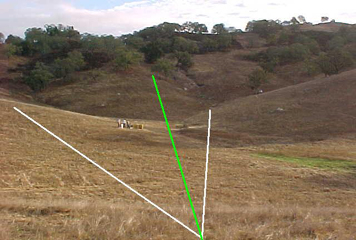 Test 1
The 1st test was a double with a blind.  The line was on a rise facing to the North.  The right hand dead bird was a pheasant hen thrown from right to left (225 yards) along the down slope of the hill into a small dry, rocky creek-bed. The guns retired behind a tree and a small hillside.  The pheasant hen flyer to the left was thrown right to left 120 yards from the line. After the dogs picked up the two marks, they ran a blind between the marks and off the back side of the flyer. The blind (hen pheasant) was planted in front of a rock pile (263 yards).

At 7:15 Test Dog #1, “Yakity” (CF) came to the line.  She recovered both marks without a handle and picked up the blind. Test Dog #2, “Cutter” then came to the line.  He recovered the flyer and handled on the right hand bird then picked up the blind. Dean then announced that the first running dog, #88, should report to the first holding blind at 7:50am. At 7:52am dog #88 was called to the line. The weather conditions have remained fairly consistent with clouds moving in and out and the wind up to 12 mph.

The Gallery
As of 11:00 am PDT, 32 dogs have completed the test of which 6 have handled. The majority of the dogs are doing very well on the flyer. The right hand bird has seen work from a pin to large hunt to handles. The afternoon brought forth more consistent winds. The sun had an effect on visibility in the late afternoon. Handler visibility caused a few to work extra hard at completing the blind. At 5:15pm dog #84 completed the series. The judges called it a day as visibility could have become a problem. There are 3 dogs left to run, dogs 85, 86 and 87. There will be 1 test dog run in the morning at 7:00 am with the running dogs to follow. At the end of the day, 87 dogs have run, 23 have handled and 2 have picked up.