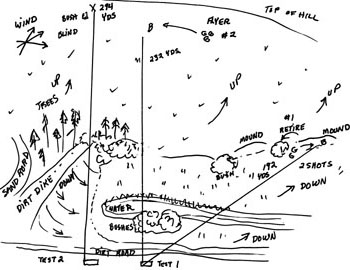 Morning arrived cold and clear. Temperatures were in the low 40's and there was little wind. Both early caravans received a police escort to the edge of town in the pre dawn darkness. After, it was a relatively short ride to the site - at least for the later caravan. (The first one went down the wrong road and had to regroup.) Temperatures rose rapidly and by noon it was relatively hot, with temperatures in the upper 70's and bright sunlight.

The site was an expansive rolling field that sloped down to a brushy ditch containing running water. Beyond, the hill rose upward and was covered with short grass and small bushes. On both sides of the ditch, there were random, large bushy patches .

The first series slowly formed in the dark. As dawn arrived, it illuminated a double set of guns on the far side of the ditch, along with two running mats. The right set threw a dead rooster pheasant angled a bit back to the right. It fell on the near side of a  low, mound like rise about 192 yards from line. The second station was located to the  far deep left of them. They shot a flying rooster well ridden out to the left. As the dog was sent, the right right guns retired behind a bush to their left.

After the marks were recovered, the handler picked up the last mark on the mat to the left. From there he ran a single blind to the deep left of the flyer mark. It was also a rooster planted near a small green bush, 294 yards from line. The combined tests took about 8-9 minutes to run and would probably not be completed on Sunday.

The flyer was exciting and fell wide to the left. Between the line and ditch a large stand of bushes blocked the direct path and many dogs took one side or the other, altering their original route. The water filled ditch then caused some to square it and distracted them farther from their line. Some arrived behind the guns, others between them and the mark. A switching wind aided some while it hindered others. After a number of flyers were shot, scent was everywhere and dogs would hunt old falls before locating theirs.

Long hunts could dim the retired mark memory and when sent for it, dogs would also be diverted by the cover changes and drive past the bird, hunting the expansive area deep of it on either side. After going long for the flyer, some appeared to believe the retired mark was long also. Again the lack of, or switching wind penalized some while rewarding others. A number of dogs would not return to the shorter fall area and/or appeared to wind the flyer crate at times and had to be handled to the mark. Of the first 35  dogs, 19 were handled and two picked up.

The blind was then run from the left mat. To recover it, dogs had to cross a dirt road and take an angle along the right,  brushy side hill of a flat dike. They had to hold that line through a bushy depression containing sparse saplings, to the hill which rose beyond.  Some dogs wanted to run down the dike while others fell off the side hill to the flatter land below. Both were off line and early corrections were needed. After mid day, dogs seem to line to the blind from the depression back - perhaps on a scent trail.

Earlier an announcement was made that dog 27 had scratched.

About 2  p.m. the test was illuminated by the sun and dogs did much better on the marks. By about 5 p.m. the light begain to wane and the test was suspended after dog 60 ran. It will resume Monday morning with a test dog at 6:45; first dog #61 at 7 a.m. There are 17 dogs left to run. No partial call-backs will be given.