A warm and breezy morning greeted workers. It was in the low 60's with the forecast  predicting the mid 60's . Historically, it is much cooler and most people came prepared for winter like temperatures. It was a pleasant surprise. 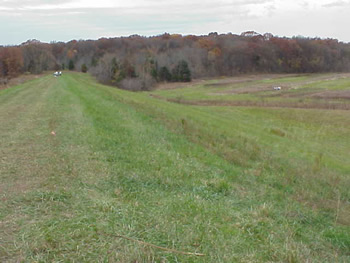 Test One - Land Double with Retired Gun
A beautiful sunrise greeted early participants . About 6:46 test #1, a land double with retired gun, was ready for a test dog. They were: AFC Dakota's Rascal Ryan LF, co-owner Joanne Laub handling and Fox Hollow's Cut and Run, LM, handled by co-owner Marty Kirby. Joanne demonstrated the test  first with some hunting followed by Marty who needed a handle on the retired mark.

The test was set on a fairly high, grassy dike. The line faced directly down the road on the top of the dike. A set of live gunners were positioned about 120 yards out and shot a flying rooster to the right where it fell at the base of the dike in grassy cover. A second set was stationed deep with in the field to the right of the dike. There were large patches of taller, irregular shaped brown cover with  strips of shorter green cover between them. A brush lined winding creek lay between the base on the dike and the expansive field where the gunners were. They threw a dead rooster sharply back to the right where it landed in the edge of the taller brown cover about 248 yards from line. After they threw, the live bird was dispatched. As the dog was sent for the flyer, the second set retired to a well camouflaged blind to the left.

At about 7:15 the first running dog, # 19 arrived on line and produced a pleasing test. It took about 5-6 minutes to complete.

The very visible and exciting flyer fell down to the grassy cover below the dike, but a number of dogs and down the road a while before angling down to the base where it lay. Some lost their mark and had to hunt for it. Others over shot it and had to hunt back, while others had deeper falls and had to cross the strip of cover lining the creek and a few hunted short, caught by old fall scent.

The retired bird mark was fraught with distractions. Dogs would angle down the dike a bit to the left or right, then square the cover lined creek where they lost sight of their mark. Once in the expansive field beyond, the large patches of cover looked remarkably similar and some would not angle to the one where the mark lay, but parallel it instead. Others hunted the right patch or the green strip between them.  Those that did arrive near the mark were tempted to duck into what appeared to be one of several "slots" in the cover. A switching wind over the pheasant made scenting difficult. Once in the cover, dogs could not be seen and nervous handlers moved to and fro hoping to see the dog reappear with he bird. Alas, many were stunned to see the dog reappear on the far left of the patch in a green strip, well out of the area and without the bird. There a number hunted fruitlessly , a few trying to return to the old flyer mark. Early, it was nearly impossible to handle them back to the fall, but later conditions seemed to improve. By mid afternoon there were a couple of pick-ups and a significant number of hard and loose hunts on that bird.

The partly cloudy morning turned into a mostly cloudy afternoon with light intermittent rain, gusty winds, and falling temperatures. There were numerous no-birds for the last 20 or so dogs, bit the series was completed at 4:25 p.m. afyer dog #18 returned to line.

Most participants quickly wrapped up their day and drove to the "tack house' on the Busch grounds. There Purina hosted a wonderful supper for all.