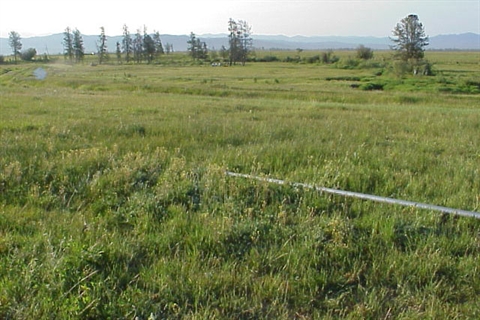 Test 1 from the line
Close up of left flyer and right retired marks
A cool clear morning welcomed the 2003 National Amateur Stake. It was in the mid 50's with a light breeze. The caravans left on time, traveling south on 55 to Maki road eventually arriving at the site of a previous National test.

The first series was a land double with a shorter, retired mark

The line faced a rolling, irrigated pasture with a winding dirt winding through it. The land was above the road that had a 6-8' irrigation ditch paralleling it on the near side. Once over the road, there was rolling terrain, ditches and patches of water. Deep to the left , about 208 yards away stood a set of live bird gunners.  They shot a live hen pheasant ridden out well to the left where it landed in medium pasture grass..

Well to their right and closer to line, a second set of gunners were placed in front of a tree and brush cluster. They threw a dead pheasant across a small water filled ditch. It also landed in medium pasture grass nearly 148 yards away. The order was : dead bird (r), flier(L). Both were nearly down wind early.

The line to the flyer was full of cover changes, ditches and the road. All these factors urged dogs to square some of them, thus throwing them to the right, away from the well ridden out bird. Just beyond the dike road was a heavier patch of cover that also threw them to the right. The hen pheasant had little scent and dogs hunted long and hard at times. A switching wind could aid or hinder the dog, too. Some hunted to the right of the guns in an inviting meadow area. There were a number of handles  by dog #40.

The retired bird had it's pitfalls also. The line to it was also through the water filled ditch, over the road and down through a patch of heavy cover and a small but deep patch of water. Beyond was a small patch of heavy cover. The bird lay beyond it in lighter cover. However, dogs were tempted to avoid the cover and water and go to the right. There they could wind the holding blind were the guns hid. They would hunt there any the heavier cover around them or go to an inviting meadow to the deep right. Most eventually hunted their way to it, but a couple went to the far left and appeared to be on their way to a switch, or hunted the no-man's land between. Those, too, needed a handle. The test averaged about 8 MPG and the ETA was expected to be around 8 p.m.

By 2 p.m. it was evident the judges had the situation well under control.

Work varied throughout the afternoon, however in the early evening a spate of extended, out of area hunts, handles and  several no birds slowed progress and the ETA was revised to about 9:15 - 9:30. Luckily it would remain light enough to finish at that time.

The test ended with dog 105 (a no bird) at 9:10 p.m. Callbacks would be very late.
In all, about 27 dogs had handled (not including one that had handled without success on a sunken bird - he was scored to the first time he was in the fall area.)