Highlights of the Saturday Meetings
The Saturday meeting began with the Retriever Advisory Committee at shortly after 2 p.m. held in a local school auditorium. It was called to order by acting president Bill Daley and included Bill Speck, Jerry Mann and Gordon Hildebrant  - the latter three from AKC. 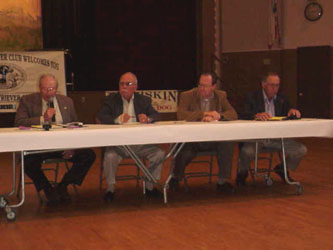 Bill Speck announced that the AKC had passed the previously suggested revisions and they would go into effect, January 1, 2004.  He then said that litters could now be registered online and that soon, they would be able to  accept Field trial/hunt test entries online also.

Bill Daley explained that the recent concern over the prohibition of live ducks at events was not applicable to dog events. Bill Speck said AKC is sensitive to any legislation that would impact dog events and they had lobbyists and lawyers that could help. He suggested that those concerns be directed to AKC for possible action.

Two  new recommendations were presented to the RAC for consideration. They were: The use of "dummy" holding blinds in the field were a test is held and the use of dry shot(s) fired along with marks in a multiple mark test.

After some discussion on both of the current and future recommendations, the floor was turned over to Sal Gelardi who explained that a Judges Clinics would be held in  Central and Northern California, April 3-4 2004.

After, the minutes,  financial report (handouts provided) and roll call were dispensed with (a quorum present ). Club donations were announced along with a Board decision that the 2004 entry fee would be reduced to $250.00.

The Nomination of 2004 Officers were submitted as:

They were unanimously elected.

Dennis Bath then thanked all Sponsors and patrons, awarding appreciation plaques to the Sponsors. He introduced those who were in attendance and suggested that participants thank them individually.

Bill then introduced Ray and DeDe Goodrich and explained that this trial was dedicated to them in recognition of their years of participation and generosity. They were presented with a bronze duck sculpture along with Marilyn Boatright. She and her late husband Joe, were also active in the sport. Additionally they co-owned the  ranch with Goodrich's were several Nationals, including this one were held.

Steve Bechtel then explained how the California Retriever Trainers Assn. had been formed to acquire lands in California for training. A five year effort, some will be available in spring 2004.

Mike Kammerer, 2004  NRC Chairman gave info on the stake. It will be held at Montgomery TX, near Conroe, from Nov 7-14. Judges are: Frank Kearney, Ron Ainley and Bill Daley.

After, DeDe Goodrich was invited to pick the first running number for this years Stake. It was #45.

Shortly thereafter, all were wished luck and the meeting adjourned at 4:22.