We apologize for getting your news up so late last night.  Couldn't get back to a telephone connection any sooner. Saturday, at 5:30 A.M. it was low fog again, but usually isn't at the test site.  Good luck! It is not raining again.

Jewell and Thunder were the early morning Test Dog and again did the test without handling.  They  quickly showed, the remaining 5 dogs,  the pitfalls of the right hand shoreline.  Bill Sargenti and dog number 18, were the first to run.  The lighting conditions were much better and it was sunny and warming.  Three, of the remaining five dogs, went directly to the left hand bird, which was rare yesterday.  They generally did about the same as yesterday, on the long bird, hunting  all around the retired gun station.

Tenth Series Land Quadruple
The judges were in a quandary, last evening, not knowing if they would be able to get the cars into the site they planned to use.  The one drawback, of the Boatright Ranch, is one steep hillside road that leads to many of the test sites.  It can get slick in a hurry.  Judges and workers have had few problems mechanically throughout the ten or eleven days they have been together.

The Tenth Series was located a very short distance from the Ninth Series.  Cars were moved, quickly, and the Tenth Series Land Quad was started at 9:50 A.M., when Test Dog, Alice Woodyard and Sniper, were called to the line.  The birds all had fluorescent red streamers trailing in the breeze, Sniper handled on the retired gun.  Alice was asked by the judges and handlers to take the birds in a different order than the competing dogs took them.   Jewell Easter and Thunder were next and did the test without handling.

The test was a Land Quadruple, with the middle right guns, shooting a cock pheasant,  to the right, at 322 yards.  The middle left bird, at 190 yards, was a dead hen duck thrown to the right.  This gun retired a short distance to a flyer station, which was on the far left.  They shot the third bird, a duck hen flyer to the right, at 152 yards.  The fourth gun station was to the right and a dead hen pheasant was thrown to the left.  The line was at the same elevation as the right hand birds, across rolling knolls.  The left hand birds were down in the bottom of the bowl across a road.  The test was wide open except for the retired gun station.  Guns  that stayed up were retrieved easily by several dogs, but some of the stronger dogs, like Shooter, number 67, had big hunts on at least one of the flyers.  The key bird was also picked up with little effort by several of the dogs.  It was a test that appeared to be  easier than it was.  It is likely that it was much harder, than it looked, but the best 15 dogs at the trial were exceptional markers and some of them made the key bird look easy. 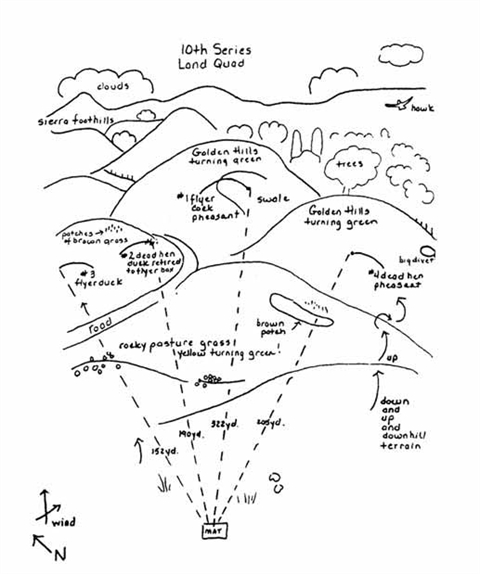 By Missy Bell
The Award Presentation Ceremony was held back at the Ninth Series site.  Chairman, Bill Daley thanked  all involved in the trial; the  Official Sponsor of the 1999 National Championship Stake, Ralston Purina Company; the other sponsors Tri Tronics, Iams and Kent Ammunition and contestants.  A special thanks was given to property owners Marilyn Boatright and Ray and Dede Goodrich  The trial had been dedicated in memory of Joe Boatright, who passed away last year. He then introduced National Retriever Club President, Tony Snow.  Tony announced the finalists and  Winner, Number 46 - 1999 NFC-AFC Cropppers River Water Teal, Labrador Female, Ownered by Marilyn Boatright and Kirk Naisbitt and handled by Bill Sargenti, of Escalon, California.  The win was very popular with contestants and gallery.  It seemed fitting that Joe Boatright's dog, should win this National, with Bill Sargenti who has been training dogs, in this area, since grade school days handling this wonderful Female Labrador.  I am sure it was a very proud moment for Rex Carr, watching Bill win a National Championship.  Bill started as a bird boy for Rex Carr, at age 10.

Thank you for spending this week with us on Field Trial News', Working Retriever Central Web Site.  We would like to thank Missy Bell, for her test drawings, Alice Woodyard and Jewell Easter for all of the data and statistics we used, the Workers and Judges who bent over backward to make our job easier.