As we arrived at the new site for the final series on this championship, gun stations were in the field and ready to go. The remaining contestants were the last to arrive at the new site and, when they did, they drove through the gallery to loud cheers and good wishes. After Dean congratulated and thanked everyone for such a special trial, he made a special note to the owners, trainers, and handlers of the spectacular pleasure it has been sharing these magnificent dogs with us this week. He closed by congratulating all the contestants and wished the remaining ones the best of luck. 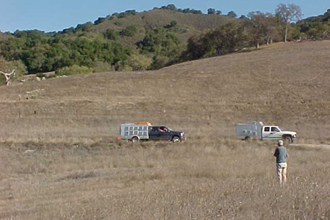 The Contestants arrive
Test dogs were called to the line. The National Anthem began playing and the test dogs were driven through the gallery is their very own cart and enjoyed the cheers from the crowd for their fantastic efforts all week.  This will be their last test of the trial. 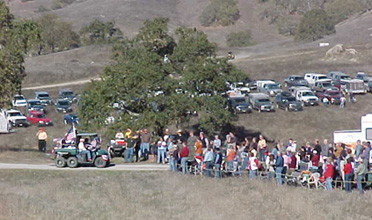 The gallery cheers on the Test Dogs 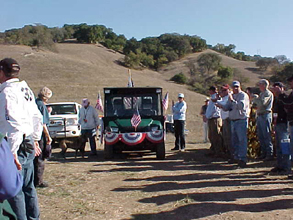 Test Dogs Arrive on Line
Yakity was the first test dog and all of her birds had very long streamers on them as if to kick off the last series.  She picked up all of her birds.  Cutter finished his last test with assistance from his handler on two of the four birds.  A very nice job for the week by both test dogs.

After a few adjustments to the test the first running dog, #33, was called to the line at 11:50am.

The test - The test is a quad with three flyers. The first bird down is a drake mallard flyer and falls 215 yards from the line. The mallard is thrown left to right. The birds go down around the horn from right to left. The 2nd bird is a hen mallard thrown right to left from the back side of the pond to the edge of the pond behind an island 260 yards from the line. The gunners retire in natural cover. The 3rd bird is a hen pheasant flyer shot right to left, 280 yards from the line with the guns retiring behind a mound. The final bird is a rooster pheasant thrown left to right from the line and is 160 yards away from the line. The cover is denser and taller than we have seen most of the week.
This test is proving to be a big challenge for both the dogs and their handlers. The judges have continued their challenging approach to the trial. Most of the dogs are getting the rooster pheasant (last bird down) and the duck flyer (first bird down), The left middle flyer, hen pheasant, falls into the grass with plenty of area to hunt. The dogs are hunting the bird and after a long hunt have a tendency to run to the right middle station. Handlers are blowing the whistle and handling back to the hen flyer. The middle right gun is a mark with several water entries and re-entries. There are a few handling on this bird as well. It is taking approximately 15 minutes per dog to run the test. After the first 5 or 6 dogs had run the wind started picking up. It did not have a huge effect on the work, but in my opinion, helped a little in recovering the birds. The last dog to run, dog 28, finished running at 2:45pm. After all the dogs ran only two dogs completed the 2007 National without handling on a mark.

The gallery is a buzz about the work today and the work over the past week. The trophies are being moved to the winners table along with all the ribbons over the hill behind where the gallery was sitting for the tenth series. Who will it be? Who will be crowned the 2007 National Field Trial Champion?

Announcer Dean Ellis announces the judges are making their way to the award site. A huge round of applause ensues as the three judges, who put forth an excellent set of tests, made their way down the hill. Following the judges were the 12 finalists, all announced individually in numeric order. Yes, all the dogs that ran the 10th series completed the test and were declared, 2007 National Finalists. The suspense is building and the judges, workers, volunteers, sponsors, and contributors were thanked again for the mighty effort put forth to made this National a huge success.

Then the moment we have all been waiting for – and the winner is – FC-AFC CANDLEWOODS SOMETHING ROYAL, LF DOG #63. Owned by Ken Neil and Brenda Little and Handled by Ken. As Brenda came running out of the crowd to hug Ken and Windy, the crowd erupted with cheers and congratulations. After official photographs were taken, congratulations were spread by all. 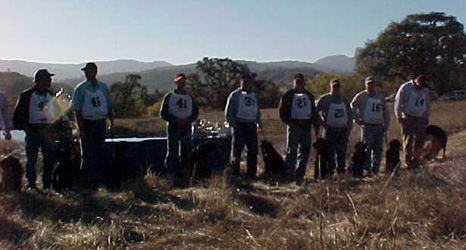 Some of the Finalists
This is the conclusion of the 2007 National Field Trial Championship. Congratulations to all the contestants, the finalists and especially the winner. The dedication of the owners and trainers exhibited this week was absolutely overwhelming. The courage, talent, and performance by all the dogs was breathtaking and almost unbelievable. Thank you for sharing this past week with us.