Test 9, Delayed Water Triple with 2 Flyersand 2 Retired Guns  - Shown, test left, right and delayed flyer (r)
The first test dog ran at 7:25 a.m., taking 12 minutes. The second test dog ran at 8 a.m. The first bird down on the test was a 347 yard retired dead duck. It was thrown right and landed near the shore. To get there the dog had to first take a good sized piece of land and then enter water to swim a considerable distance past points on the right and left. Many dogs gave in to the points. Some got to the far shore in good shape but proceeded to drive up the hill beyond. Some came back on their own after long hunts and others had to be handled.

The second retired dead duck down was thrown to the right at the shore at 270 yards. To get there the dog had to go through a near pond where the fourth bird, a delayed live duck flyer had fallen. They then went over a good sized piece of land and entered water for a long swim to the far shore. Some dogs failed to re-enter and took land on the left to get to the bird.m with some difficulty, a few handled. Others did a fairly good job of holding their line.

The third bird down was a duck flyer to the left and thrown to the right on a hill about 90 degrees from the lines to the two retired guns. This bird did not cause many problems, but did provide an exciting distraction from the two retired guns. To get there the dogs had to go through water that included an area of running water, go between saplings and drive up a grassy hill to the fall area at 130 yards.

When the dog delivered the third bird down, the judges signaled for another duck flyer. three gunners had marched out right in front of the dog to shoot a flyer. The gunners and arc intersected the lines to both retired guns. the fall was in a pond right in front of the dog and slightly angled back to the left of the line to the middle retired mark. The splash was only about 73 yards from the line and electrifying to the dogs. Before being sent for the two retired marks, the fourth set of gunners (short) retired into bushes on the right.

The last dog ran at 2:15 p.m. There were seven handles and two pickups and one no-bird. The announcement was made that callbacks would be given at the next site. 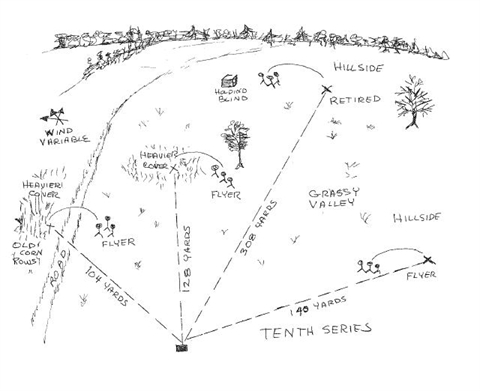 Test 10
The line was on a hill overlooking a grassy valley with mixed length and type of cover. The judges' tent had two lard US flags on the side toward the gallery area. There the flags reminded everyone of the state of readiness that was still going on - with anthrax fears and tension concerning what terrorist tragedy might next occur.

The first test dog stepped to the line at 3:15 p.m. and signaled for the birds. Shortly after the Tenth Series had started.

The first mark down was a dead hen pheasant thrown to the right. The gunners then retired at 308 yards. The retired gun blind was easily seen - in contrast to the carefully hidden stations on earlier series. The dogs ran down through the valley and up a hill. Some went behind the gun and hunted their way to the dead pheasant while others did a good job of going directly to the mark.

The second mark down was at about 128 yards on a line slightly to the left of the line to the long gun. It was a cock rooster flyer thrown angle back left into fairly substantial cover. This caused many dogs to have a long hunt.

The third bird, a hen pheasant flyer, was further to the left near a gravel road at 104 yards. It was thrown over the road into the edge of taller cover. Some dogs had lengthy hunts but most did fairly well.

The last bird down was a hen pheasant flyer at a station way to the right and thrown right-angled back. It did not cause much difficulty or hunts.

There were three no-birds, two dogs handled and many had varying hunts from brief to very long. There was some concern that the test would not be finished before darkness made it too difficult to continue. Happily, the last dog ran while there was still sufficient light and the 2001 National Retriever Stake ended at 5:30 p.m.