Series Eight: Water Quad - completed 22 Dogs were called back to Series Eight. Saturday' weather was partly cloudy with temperatures in the low forties in the morning and a high of 67 in the afternoon. Winds were 10-15 mph from the northwest. The first test dog ran at 6:36 A.M. Dog No. 1 started the test at 7:35 A.M., but a no-bird was called. Dog No. 2 followed. Series Eight was a Water Quad with a long retired gun and a "bulldog" duck flyer shot in the dog's face after the first bird was retrieved.

The line was above the test on the huge dike at Busch Wildlife Area. The long retired gun was thrown from left to right on the far shore at 285 yards and the guns retired. The line to this bird was across two points half-way to the bird. Then a dead duck was thrown from right to left from the right-hand flyer station onto a point at 117 yards, over the line to the long bird. The flyer guns then shot a live duck angled back to the right into the water at 130 yards.

Series Eight Water Quad
After the flyer was retrieved and the dog was returning to the line, a "bulldog" duck flyer was shot from a flyer station which was located on the dike forty yards to the left of the line. The bird landed below the dike on land 60 yards from the line. Many of the dogs had good work on this test. Five dogs handled, one a double-handle, and one dog picked up.

The first blind was the left-hand blind placed on a log at 125 yards. The right-hand blind was 210 yards on the middle of a point on the right hand shore. Both blinds required entry into a small bay and the crossing of a point and re-entry into the water. 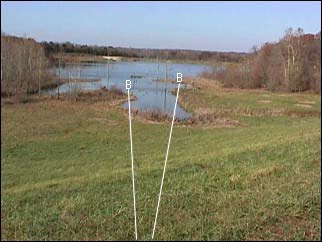 Series Nine Double Water Blind
Most of the dogs did very good work on this test, which required a few whistles to keep the dogs on line. Three dogs were dropped and 12 Dogs were called back to the Tenth Series.
Series Ten: Land Triple - completed

12 Dogs were called back to Series Ten. The Tenth and final Series was a Land Triple with a long retired gun and a flyer.

The Tenth Series line was located below the dike where the Eighth and Ninth Series were run. The first bird was a dead hen pheasant thrown to the right into heavy cover near the edge of trees on the right at 250 yards. The guns retired into a holding blind wrapped with corn sheets. Guns on the far left were stationed next to the hedgerow and then threw a dead hen pheasant from left to right into a wide and long section of tall corn rows, landing at 150 yards. The flyer station on the right then shot a live hen pheasant from left to right at 125 yards.

Series Ten Land Triple
In order to conserve daylight, only one test dog was run, at 2:54 P.M. Dog No. 80 started the test at 3:10 P.M. There were only a couple of dogs who did not have a big hunts on the long retired bird. The line to the long bird was through a section of corn located behind the flyer guns. With one exception all of the dogs avoided the corn which pushed them into the clean row of rye which led directly behind the holding blind. Most of the dogs hunted to the left of the holding blind before hunting in the area of the bird to the right near the trees. Several dogs also hunted the left-hand bird and one dog was picked up after a long hunt and many whistles to handle to that bird. The gallery's concensus leader of the trial entering the Tenth Series hunted and handled on the long retired gun. Two dogs handled on the test and there was one pickup. Almost all of the dogs had big hunts. Each handler was congratulated by National Retriever Club President Joe Lane and Field Trial Chairman Jackie Mertens as they left the line upon completion of the test. The Tenth Series was completed at 4:50 P.M. Eleven Dogs finished the 1998 National Open Retriever Championship. The Judges, Judy Aycock, Kirk Naisbitt and Phil Clifton, and the Finalists left the test site in a caravan to the Old Lodge at the August A. Busch Memorial Wildlife Area where the awards ceremony would take place. The caravan of spectators and workers followed.

At the Lodge, President Joe Lane introduced the Finalists and then announced the winner as "Dog No. 2., Field Champion and Amateur Field Champion Abe's Ebony and Ivory, handled by Wayne Curtis and owned by Sharon and Gary Hanvey." A loud cheer erupted and congratulations were extended to the Winner and Finalists by the large crowd in attendance. Wayne hoisted "Eba" on the trophy table amid the flashbulbs going off as Sharon and Gary greeted their 1998 National Field Champion. After a long week, "Eba" follows in the footsteps of many National Open Retriever Champions crowned at the Busch Wildlife Area.