Saturday is a time for socializing, last minute training and attending the meeting of the Retriever Advisory Committee and the National Members. This will be a brief overview of what was discussed. The full report will be in the January issue of the Retriever Field Trial News.

The RAC was called to order at 1:05 pm by President Nelson Sills. Attending were Lisa Carroll, Jerry Mann, and Bill Daley. They reiterated the changes that were discussed in spring. This included quality of judging, movement of guns, and poison bird blinds, and Canadian dogs in AKC stakes. There are several amendments to existing rules. Ballots will be distributed to the clubs and must be returned by end of January 2008.

Lisa Carroll reminded delegates that clubs must submit 2 copies of their premium to the AKC prior to their stake. If not, there would be a fine. This year the fine may be waived, but next year it won't.

Due to a question concerning fee increases for recording and event service fees, the following was announced:
AKC has voted (unanimously) to maintain the current Recording Fee for all sports and increase all Event Service Fees from $1.50 per first entry to $3.00 for each applicable sport. Additional entries of the same dog will be increased to $3.00 Recording and/or Event Service Fee as applicable in all AKC licensed and member events held after January 1, 2008, with the exception of Field Trials and Hunting Tests. For Field Trials and Hunting Tests, the Event Service fee for additional entries of the same dogs is to be $1.50, effective January 1, 2008 and $3.00 effective January 1, 2009.

With that, the meeting adjourned at 1:25 pm.

There was a half hour before the annual National membership meeting. During this time, people socialized, caught up on news, and speculated about the upcoming stake. At 2:05 pm, President Kirk Naisbitt called the meeting to order. Officers also present were Gary Ahlgren, Bill Goldstein, Tony Snow, Lee Jolley, and Mike Kammerer. Kirk requested that a moment of silenced be observed for those who are no longer with us.

Tony Snow reported that there was a quorum present. Motions were made to accept the minutes and the Treasurer's report, as copies had been passed out prior to the meeting. There was no old business and no new business. Dennis Bath, the sponsor liaison, then awarded plaques to all the sponsors and explained what all had donated. He also gave a brief description of the new RFTEntry service and how it can benefit clubs and members alike.

Then Tony explained that Dennis was retiring and that he would switch positions with Mark Rosenblum, who would be the new Editor-In-Chief as of January 1, 2008. After, he announced that Mary Knapp was also retiring. Dennis presented Mary with a gorgeous bronze lab statue sitting on green polished granite base with a plaque. In turn, Mary and new Managing Editor Nicole Hahn, presented Dennis with a designer garden bench with sculptured ducks and a plaque. 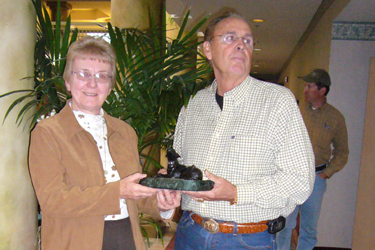 Mary Knapp & Dennis Bath
The 2008 slate of officers was then announced by Tony. It included President Mike Kammerer, Vice President Bill Goldstein, Secretary/Treasurer Tony Snow, and Zone Representatives Lee Jolley and Gary Ahlgren. Bill Totten, president of the PRTA, announced that seven clubs had applied for land improvement grants. They were all accepted and approved. In 2007, 3 clubs will receive the grants. They are Port Arthur, Lincoln Trail, and Jacksonville. In 2008, Red River, Wisconsin Amateur, and Manitowoc will be the 3 recipients of grants. In 2009, Minnesota Iron Range will be one of the recipients, with the other two yet to be announced. He also mentioned that the PRTA will host 8 field trials in 2008.

Mike Kammerer, field trial chairman for the 2008 stake, announced that the stake would take place from November 9-15 in Montgomery Texas. The land consists of rolling pastures, tree stands, and small to medium ponds. Headquarters would be the same as 4 years ago. The judges will be Jane Paul, Charles Hayden, and Gary Zellner.

The current stake test dogs were announced as Dual AFC CH Genny's Yakity Yak Don't Talk Back, ChesF, handled by Linda Harger and FC Inherit the River, LM, handled by Rob Reuter. The current judges were introduced and included Jim Cope, Lynne DuBose, and Cliff Garland. Next, a unique starting number selection was held. 90 key chain dummies were spilled onto the floor and 2 very eager little puppies were encouraged to pick one up. Each dummy bore a dog's number. After a couple unsuccessful retrieves, one finally returned with the lucky winner's number. The starting dog would be number 88, FC-AFC Shooter's Sugar Cookie, handled by David Jensen. 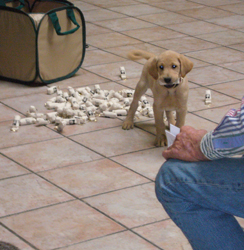 And the winner is...#88
The first series would be a land double and a blind. Test dogs would start at 7:15 am with the first running dog on line at 8:00 am. Several other announcements ensued and committee meetings were to be held after the meeting. At 2:40 pm, the meeting was adjourned, leaving people time to visit, shop, and get ready for the Cocktail Party at 6:00 pm.