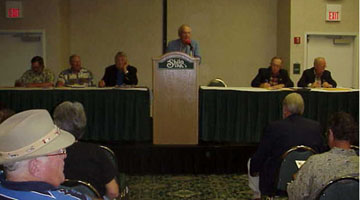 At 2 p.m. the Retriever Advisory Committee Meeting was called to order by Nelson Sills. The Convention Center at the Shilo Inn was well populated as several issues concerning the determination of Amateur status were on the agenda. On the dais also were committee members Bill Speck, Jerry Mann, Bill Daley and John Goettl.

Pete reviewed the current determination of an Amateur by reading the present information from the "Rules and Procedures" pamphlet. He then addressed the 4 recommendations to change the existing rules:

First: Recommendations as to amateur status would be would become rules to abide by and would appear as such in the Rule portion of the pamphlet.

Second was the matter of  the type of compentsation given from one to another along with what constitutes field trial or hunt test training. The goal of the training was what would be considered.

Third: Who decides who is or is not a pro. Suggested was a statement signed by an individual which states that he/she is familiar with the amateur status rules and is an amateur by admission. If fraud was discovered later, various penalties could be assessed. The determination then is removed from the Field Trial Committee.

Fourth was the issue of inappropriate relationships or associations with a pro trainer. A concept taken from pointing dog rules would replace the current recommendation. It states that amateur status is denied to any person who is a member of a household of a person who does not qualify as an amateur.

A lively discussion occurred on nearly every point and the meeting went about 10 minutes overtime before
adjourning.

After, the conference room filled with more participants for the National Amateur Retriever Club Annual meeting.
Due to the previous meeting, it was called to order at 3:20 p.m. by President Gary Ahlgren. On the dais were members Ray Vreeland, Liz Jerome, Dean Ellis, John Russell and Charles Tyson.

Ahlgren thanked all the sponsors, then held a moment of silence for deceased participants, dogs and people since last year. The minutes, financial report and roll call followed.

After more announcements and presentations, the floor was relinquished to Co- Chief Marshal Susan King for info on the '02 trial. She gave the rotation, 1-27-54-81 and announced the first series to be a double and a blind.
There would be no partial callbacks during the trial and the test dogs would run at 7:30; first running dog at 8.

Soon after the meeting ended with an invitation for all to attend the pre National cocktail party scheduled in the same room at 6PM.