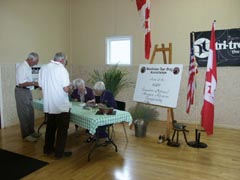 The caravan left the campground at 7:45 AM and headed for the test site which was just west of the main campground. The sky was clear with a S wind gusting to 15+ km/hr.

The land quad was an inline triple with the center bird retired and it converged with the go bird. The quad consisted of the right gun station at 94 yards throwing a pheasant, right to left. The 2 nd right gun station at 156 yards, retired, throwing a drake mallard duck left to right. The 3 rd gun station was the long bird and was 245 yards. They threw a hen mallard which had been flagged with two white ribbons, right to left. The 4 th station was on the left and was 237 yards. This station retired as well. They threw a mallard drake, left to right and was 150 yds to the left of the inline.

The 2nd test dog was Bluenorth’s Alces American handled by Ed Zeerip. They handled on the go bird and then picked up the long bird second. They did an excellent job on the short retired bird as well as the long retired.

Most dogs picked up the inline first and then the long left retired. The go bird pheasant proved very difficult for the early dogs. Later, there was a shift in the wind which helped.

There was a tendency to hook the center short retired gun, although a few marked it very well. The most challenging mark was the stand alone left retired bird. There was a wall of tulies 1/3 of the way to this mark. The tulies blocked the dog’s vision of the fall to the ground, so there seemed to be no discernable area of fall. There were 7 handles, some of them had 2 handles. There were two dogs carrying 2 handles from previous tests who managed to complete this test without handling. There also were some clean jobs – no handles but substantial hunts. The test concluded at 11:20 AM.

This test site was sponsored by Delta Waterfowl. 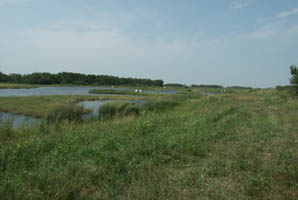 The first test dog was FTCH AFTCH GMH Clubmeads Autumn Breeze CDX handled by Sue Taylor. The dog got lost coming in from the center retrieve as she had a wing over her eyes. The mark was easy for Breeze but the trip back home was a real challenge as a result she could not be expected to go for the 4 th bird.

The second test dog was Bluenorth’s Alces Americana handled by Ed Zeerip. Moose went back to the right hand bird and had to handle but he picked up a bird that had been left in the area from set-up. Moose then did a good job on the centre retired and had to handle on the long left retired bird. The test took 30 minutes for the dogs to complete. The starting time for the 10th series was 2:41 PM.

This test was a test of courage for the first 7 dogs as the winds increased from 30 kph to the expected 60 kph. It was a south crosswind. Then the winds calmed and there was a short lull before they came up again from a more southwesterly direction. Most handlers chose to pick up the quad go-bird first, then right boat bird, then center retired bird and lastly the long left retired. The first two birds appeared quite easy for all the dogs and a few had trouble with the center retired. On the left retired, the work varied greatly. Dogs went past the point towards the far shore and had to be handled back. Some hooked the gun station and recovered quickly and a few had excellent mark on it.

Thank you to all our National Sponsors, especially Nestle Purina, the official dog food supplier to the NRCC, Laura Leigh Camerilli and her Purina contingent of Les Oakes and Tim Crone provided all the competitors, workers, and spectators with a complimentary breakfast on Thursday, Friday and Saturday. Purina also very generously sponsored the winner’s party.

When the time came to raise a glass in a toast to the winner of the 2007 Canadian Amateur National, we were toasting dog #45 FTCH AFTCH Northern Dancer 11 and his owner/handler Jim Harvie of Bashaw, Alberta.