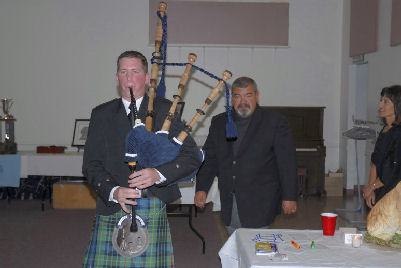 Piping in
Saturday dawned with blue skies and great promise. The committee had been hard at work and now it was time to bring things together. Fields around the area showed the abundance of canola, wheat and barley - a feast of colour for the eyes. Many happy reunions were evident at the Black Nugget Lake campground, the headquarters for the event. Directors’ meetings took place in the afternoon, followed after by the banquet at Holden Community Hall, a short drive from headquarters. A repast of turkey and all the fixings were offered to competitors and guests, who ranged far and wide from the U.S., eastern Canada and locally. The head table was traditionally “piped” in and the evenings’ festivities began. After the wonderful meal, a lively Calcutta auction ensued. Starting dog was drawn from the rubber ducks and number 52 was the lucky number. The judges wished all competitors good luck and departed prior to the auction.