Wow, 5:00 AM sure comes early! We were all up about that time to air and water dogs and prepare for an exciting first day of the National. The caravan left HQ exactly at 6:30 AM as promised, leading us to the land site at Durham Bridge, with Traffic Chairman Jerry Choate in the lead. Traffic and grounds are under the direction of Jerry with John Gaunce and Nelson Spencer in support. Our marshalls, John Sellick and Ken Eagles, had their instructions from the judges and were ready with Test 1 when we arrived. The weather was cool and breezy; skies were mixed clouds and sun. The temperature is expected to rise to 20 C by afternoon.

The first test was a stand out triple in an uncut hay field which had a number of low lying swales with golden rod and long grass for cover. The long center mark was 235 yards from the line. The shooting order was center, left and right with the short right bird about 80 yards from the line. The left bird was 145 yards. The short bird was a rooster pheasant and the other two were ducks. 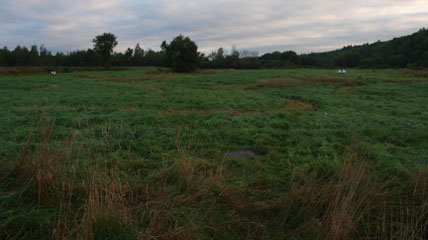 Test 2
The two test dogs did creditable jobs and the judges called for the first dog at 2:00 PM. Blind planters for this test were Stan Hughes, Derek Dunn and Peter Squires. The test ran smoothly and the work was generally very good with many dogs lining the blind or requiring only one or two whistles.

Test 2 was completed by 4:30 PM and the judges called all 53 dogs back for the third series. The judges have been reasonable with their tests and lenient with the call backs which is much appreciated by all of the contestants. Testing ended for the day with the announcement that dog #26, Picture Perfect III, MH will start the next test.

We would like to express our thanks to Eukanuba, Purina and Tri-Tronics for their support throughout the day. 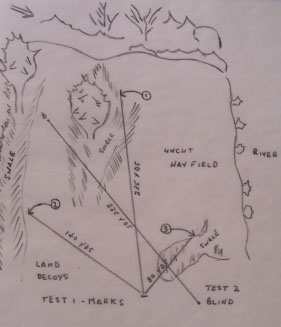