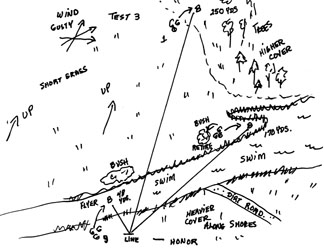 Test 3 - Water Triple with Retired Gun and Honor
Once again we were blessed with a beautiful morning. It was clear, cool with little wind and temperatures in the mid 40's. Most found their way back to the site, especially those who had not yet run. (Probably awake most of the night .)

A single test dog was run shortly before 7 a.m. and the first running dog, # 61 arrived on line about 7:15. Conditions were much the same as the previous day with just a bit of difference in the wind.
Dog work appeared to be better, but there were still a few handles. In all, 22 dogs handled on the marks. By 9:20 a.m. the combined series was completed and a water blind in the same area of the Cooper Black area was announced.

The line was set on the the dike from the previous series facing dow the water filled ditch toward the pons. A blind was set up on the side of a distant point. At least 3/4th of the test was land. At 10:03 the first of a succession of 3 test dogs tried the test and all failed when they either went out of sight or could not hear the whistles in the thick cover along the ditch/pond. Even additional grooming did not help.  After a brief discussion, judges decided to go with a water triple instead.

The line was moved forward a good distance on the same side of the ditch, where it emptied into the pond. A set of 3 guns was positioned across the water, high in the field beyond. They shot twice and threw a dead rooster flat to the right where it landed in medium cover 250 yds. out. A second group of three was located just across the mouth of the water, and tight ot the deep, left one. They shot twice and threw a dead duck to the right where it landed on the shore, near the water in heavier cover about 170 yards from line. The third was a set of flyer guns a short distance to the left on the line, on the near shore. They shot a flying duck to the right which landed in the water about 48 yards away and was sluiced after it fell. As the dog was sent, the short, right guns retired to a bush on the left. There was also an honor to the right of the running line.

By 11:40 the series was ready and the first test dog appeared. After both did well, judges moved the line to the left about 30+ yards and reset the honor to the right. This put more of an angle to the marks across the water and made the flyer more" interesting" for the dogs. Another test dog was not run A switching, gusty wind varied from left to right across the test.

Both test dogs and most of the first few did it quite well, but then 3 in a row either handled or picked up.  After recovering the flyer, handlers usually sent for the short, retired gun second. Some dogs squared the water, came up behind the guns and drove up the hill toward the wrong side of the long mark. A few were handled. Others blew threw the short mark, recovered the long one and, when resent, tried to return to it again. A few hunted down the near shore, possibly held in by carry back
scent.