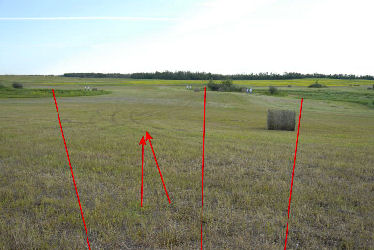 Test 1 - Land Triple
Monday dawned with mostly clear skies. The convoy left headquarters on time at 7:00 AM and headed to the site of test 1, a land triple.

Competitors and spectators were guided into a freshly cut hay field and some bales, with patches of cover interspersed. Three gun stations were in place. Also evident were two large groupings of goose decoys on both sides of the test. Some dogs took a look at the decoys and although not really an influence on the dogs, it gave the gallery something to talk about. The middle station at 220 yards threw first, a drake mallard from left to right. Then, the right hand guns at 150 yards threw a hen mallard from left to right. It was a very long throw and there were a few no-birds on this station. The left hand guns threw last, a rooster pheasant at 165 yards. After the dog picked up the go-bird pheasant, those guns retired behind a bale.

Male test dog, “Fifthavenue’s Mighty Maximus”, handled by Bruce Macdonald showed that the test was very doable. Female test dog “FTCH AFTCH Harvan’s Sierra Sunrise”, handled by Robin Dean hunted on the right mark and showed the difficulty of coming up with the bird under the initial wind conditions. At the start, temperatures were pleasantly cool and a small breeze was coming from the southwest.

As shown by one of the test dogs, this made the right mark very difficult for some, as dogs could not come up with the bird unless they were deep of it and far enough from the guns. Later, temperatures rose to 27 degrees and the wind picked up from the south. This made the right mark easier for dogs to wind, even if they ran to the gun station. However, this wind started pushing dogs left on the long middle mark and a few loose hunts occurred deep and to the left of the gunners. Late in the test, a couple of dogs missed the right mark and hunted into the long mark.. The test took about 4 minutes per dog and concluded at 2:45 PM. There had been 4 switches and one handle. Dropped after the first series were: 29, 44, 54 and 70. Dog number 47 was a no-show. Dog number 50 had been a scratch from the bitch vetting. The Eukanuba representative, John Sharpe handed out jackets prior to the land blind, as there had been a problem with shipping. Thanks to Eukanuba for these jackets. 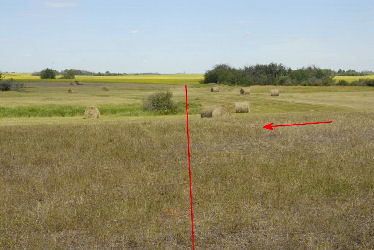 Test 2 - Land Blind
A land blind was set up in the same field to the right of where the marks had been. The judges removed the goose decoys that had been on the right side of the test. The blind was 275 yards in a crosswind with 3 drake mallards planted at the second bale to the right of the line, deep after the dogs got through the points of cover on the left.

Initial line was hard to get, as dogs either wanted to go fat into the cover, pushing off the first bale, or to the right and avoiding the cover. The “poison bird” ducks were definitely a factor, as 6 dogs got one of those birds in the 35 that were run before the test was called. The blind was stopped after dog 26 had run, due to thunderstorms and lightning. Everyone headed back to headquarters to join in the Purina-sponsored “Jeans & Beans” Western Night, featuring cowboy poet Robbie Robertson. Partial callbacks were not known or given at this time. Talk of the day – “Girl Power” is very much in evidence and cheered after each woman runs. Some of the men are thinking they need to get their own cheer. Sharon Gierman’s boots are a real fashion statement. Today, it was decided to call them a “geometric blue”, matching her outfit. 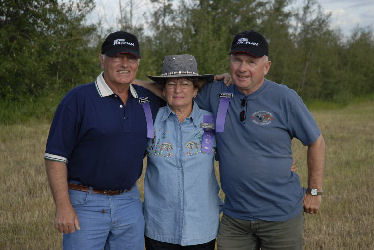