The caravan of handlers left the main campground at 7:15 AM. The sky was clear, very little wind out of the east, temp 16 degrees.

The judges were ready with test 1, a triple set up with one retired gun and an honor.

An announcement was made that due to illness, judge Phil MacMillan reluctantly had to withdraw from this assignment. It was announced that Ron MacKenzie, chief marshal would be taking over the judging assignment. Ron had previously judged a national, so was deemed an able replacement.

Kevin Howarth, the new chief marshal, reminded the competitors of the judges’ instructions and the On the Grounds Rules and Conduct.

Colin McMichael called Bob Chrystal, life member of the MGDA with his dog Sweet Molly Malone XXXI to the line as honorary test dog. Bob and Molly then retrieved the ceremonial first bird of the 2007 National Amateur.

The first test dog, Revilo’s Gunz N Roses, black lab female with owner/handler Marg Murray was called to the line at 8:10 AM. They did an able job on the two visibles and had a hunt in the area of the retired. The second test dog, Win-toba’s Quigley, yellow lab male with handler Stan Scoble were called to line at 8:12 AM. They did an excellent job on the 2 visible guns and hooked with a quick hunt on the retired. Stan and Quigley honored for the first running dog which was dog #49 FTCH AFTCH Dakota’s Quickdraw, owned / handled by Bev Fowler of Breadalbane, PEI. The first running dog was called to line at 8:30 AM. There was a wide variety of work on the test, some excellent jobs and 7 handles.

The dogs were capably announced by Annette Leptick and assisted by Elsie Baker. The first test was sponsored by Cupped Wings Outfitters.

Callbacks: Only two dogs were dropped, #12 and #25. The marshal announced that dog #6 would be the first dog to run test #2, a land blind. 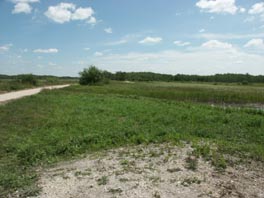 Test #2 Land Blind
The land blind was 193 yards , run southeast through the same small creek, crossing a gravel road and then paralleling the same gravel road for 20 yards.

First test dog, a female ran at 2:15 using 9 whistles to gain the line to the left of the gravel road, followed by the second test dog, a male named “Moose” with owner/handler Ed Zeerip First competing dog was dog #6 was called to the line at 2:30 PM. The series concluded at 5:25 PM There was a wide variety of work on the blind. By mid afternoon the temperature was 27 C.Callbacks: #11, #24, #33, #36 and #43 were dropped. The marshal announced that dog #17 would be the starting dog to run test #3, water marks.

The contestants enjoyed a lovely pork supper sponsored by Eukanuba with a bumper throwing contest.