7th Series Water Triple
Under rain threatening skies, the set-up crew was on the scene at 5:50 am. By 6:45 we had a few showers that did not last long as the cloud cover lifted and thinned. The judges had set up a water triple with two retired guns overlooking the same pond where we ran the 4th series water blind. This time we were on the opposite side of the pond but about the same height and 70 yards from the water. The middle gunners were first at 265 yards. Their bird landed in the same spot as the poison bird of the 4th and 5th. They threw a duck to the left so that the line to it angled into a corner of the pond, across an isthmus angled a second pond and then about 80 yards on land. Number two guns were wide to the right and across another pond-a duck thrown left at 155 yards. Both gunners 1 and 2 retired into camouflaged blinds. Finally the third bird was on the left thrown right into the pond with a splash at 110 yards. The first test dog no. 29, Grouse, with Tom Hawley was on the line at 7:40 She had good right and left birds but had to handle on the middle retired. The next test dog was no. 40, Nick with Marg Murray. He got the birds without handling but skirted some water and ran the spit on the middle bird.

Before starting the judges moved the left bird in cloer and called the starting dog, no. 54 to line at 8:16. Unfortunately, they handled on both retireds. The next dog, no.57 also handled showing that the test that looked doable was not a piece of cake. Fortunately the next two dogs did get the birds without handling. Now at 10 am we`ve run 10 dogs with 4 handles, some big hunts and some very good work. The wind has changed from southerly to northerly and we had 10 minutes of rain. Variability in everything is the word today. 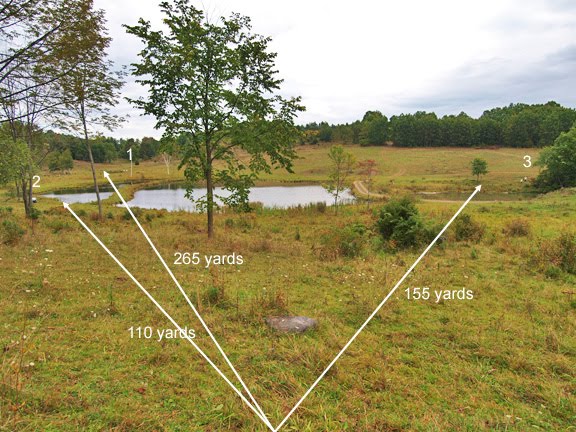 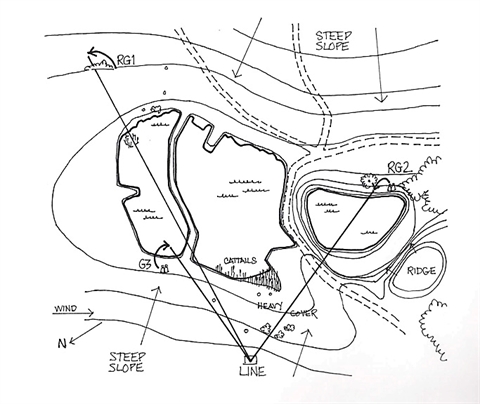 Noon--we're running the 21st dog, no. 30. We've had 6 handles usually after a big hunt and also we've had a pick-up. We'll be done mid-afternoon and the crew is preparing a water blind for later today.

It's only 50 % cloud cover now and warming up into the 60's. The wind has settled in to be steady from the NE but it is still not giving the birds away. I'll report back at the end of this series.

Quick look at 8th water blind-moving quickly with a return route on land. Dogs are doing quite well-at least most of them. Details and description later after I run! Should get done before dark easily but not before some big shadows!
6:05 and the last dog has run-good thing because the sun is getting low and in the big valleys here it gets dark early. I don't think the dogs had any visibility issues despite them being in the sun and the handlers in the shade- acredit to the dogs. Overall work was pretty good but I'm sure the judges with their cumulative scores will be able to do what they need to do.

Many of the dogs got a good IL which was though a small shoreline bush. The next hazard was a log in the water on an angle. This log was hard to climb over at one end so most handlers put their dogs over the shoreline side. Then a point was to be traversed before angling onshore. The first 50 yards along the shore had running water on one side and a small pothole on the left. Dogs tried to grab both. In additon because all of the dogs were brought back on land to speed the test, dragback became noticeable for some dogs. A few handlers had brief panic moments at the end especially if they were speedy or smelled the blind planter trail. The total distance of the blind was 223 yards. We expect callbacks shortly for the 9th!