A cold overcast morning greeted the contestants, gallery and workers.  The line for the land blind was located way to the left and high on the hillside to the left of the Fourth Series water blind.  The line was perpendicular to the line to the previous water blind. The dog had to leave the line go down a long gradual slope cross a road, out 100 yards, go into a pond, at 200 yards and cross the line of the previous water blind just beyond its initial entry  and short of the island in that blind.  The dog then went up the hill past a white coated person sitting in a chair and  to the blind at 250 yards.  The water blind was on almost the identical line but a few degree to the right of the land blind and up a gradual hill to a swimming water pond.  The dog then crossed the pond between  a point on the right and an island on the left.  The blind was at the waters edge, at 380 yards.  Handlers were instructed they could move laterally but not forward or backward.  Alice Woodyard and Sniper were the first test dog at 7:02 A.M.  After she had a good job the judges moved the line to the right and ran Jewll Easter and Thunder.  Jewell handled her dog a few extra times to give the handlers a good idea whether whistles could be heard at the end.  The wind was directly from behind the mat  for early dogs.  Dog number 17 started at 7:31 A.M. 10 of the 33 remaining dogs have handled on a mark. The wind began to change after about 10 dogs and blew from left to right but did not seem to have much affect on the blinds. Shortly after it began top rain and continued to do so the rest of the day.  Most dogs had very good jobs on the land blind and there were several good to very good performances on the water blind.  Dog 68, Open High Point Dog of 1968, Code Blue, did not fair well on this blind.  Some of the dogs who had very good jobs were 19, 45, 55 and 67.  Several of the dogs had spectacular water entries on the second pond.  Most of the trouble was caused by dogs who did not want to go back on nearly the same line as the land blind.  The wind also played a factor and those dogs who had trouble were almost always pushed right on the water blind. 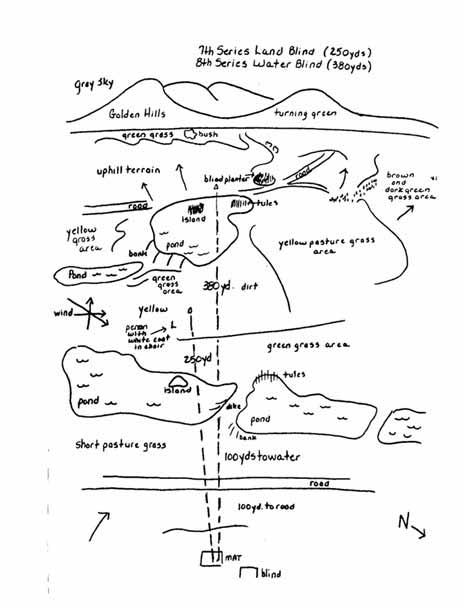 "At the beginning of the trial there were 21 Amateur handlers handling 23 dogs and 25 pros handling 58 dogs." Jewell Easter - Test Dog Handler

"The Seventh and Eighth Series Land Water Blind combination was a very mechanical test, hurting good line running dogs the most, because they usually won't go back on the same line."  Several handler and galleryites.

"Web Site looks like they are holding the trial on the moon."  Can't remember who.

"The judges were very disappointed with the wind change in the Sixth Series Land Quad.  It gave away the left bird an excellent bird."  Gray Snipes - Chief Marshal.

"Those birds were as tight as they come.  I was on one station and they were really close together."  Gary Ahlgren - Gunner. (On the Sixth Series).