Once again the stake was blessed with clear, warm weather - maybe too warm. It was 55 degrees at 6 a.m. and the forecast called for a high of nearly 100 for Friday. The Seventh was scheduled for a water blind back at the Cole ranch - scene of the first four series As all waited for the series to begin, a flock of white pelicans landed in a nearby pond. When the observed the area activity, they left for a more peaceful environment.

It took a bit longer to set up the test than usual but by shortly after 7:30 both test dogs demonstrated the pitfalls of the blind. At 8:10, the first running dog, #4 stepped from the holding blind. Contestants were advised they could only move laterally to handle.
The line was set on the back edge of a dirt road. Across the road was a fair sized stump that could distract a dog. It faced a grassy point across the first flowing stream from the right, with a shallow water and dried mud flat area between a second flowing stream. The bird, a duck, was planted on the far shore of the distant stream, marked by a post about 275 yards from line. There was little wind and it took about 6-7 minutes to complete.

It was difficult to obtain a good initial line and even harder to hold it in the significant current. Dogs would be swept to the left, and a handle back on line was against the current. Handlers quickly adjusted by lining dogs a bit to the left. Some tried to channel, which would put them off line. A right cast could put them into the current and too far right again. Some dogs arrived on the point's shore to the right of line. A few tried to stay on it, refusing the left casts back into the water beyond. There they could disappear into the tall cover on the shore line. Once back into the water (swimming) they arrived at the mud flat. They appeared to believe it was a road and did not want to take straight back casts. Instead they zigzagged back and forth , eventually finding themselves on a sandy rise to the left of the mud flat. When handled across the second flowing stream, they could again be caught in the current and be swept out of sight behind the right shore. to compensate, Handlers adjusted by giving left-back casts, even if the dog was on line. Some went too far left and disappeared until they arrived at the far shore. Some were nearly on line while others were not.

This challenging series was completed by 12:12 when dog #4 returned to line

The line for the eighth series triple was also set on the back edge of a dirt road and there was an honor mat deep to the right of the running mat. It faced a widening of the flowing stream. There was also a parallel ditch on the land between the line and water.On the right shore a set of gunners shot and threw a dead duck angled back to the left where it fell on the edge of the shore (splash) 165 yards from line. On the left shore, across the stream and farther back a second set threw a dead duck flat to the right. It landed on the grassy point in front of them nearly 233 yards away. Also on the left shore, but much closer, gunners shot a flying duck angled back to the right. It landed in marsh grass cover only 140 yards away. The order was: middle, right, left flyer. in front of the live guns, a few decoys rested in the bay, along side of the gunners. 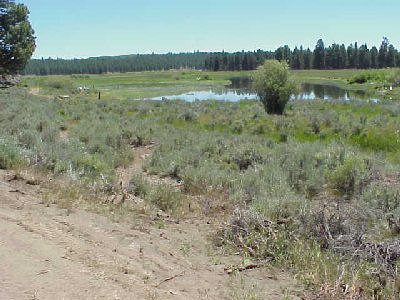 Test 8 - Water Triple
Test dogs tried the series at 1:20 p.m. and both completed without a handle. At 2:05, the first running dog, #31came to line only to receive a no bird and told to wait 6 dogs to return .It had become very warm, temps were in the 90's and water looked inviting to the dogs (and people!)

Flyer falls were varied and some landed behind a mound just in front of the gun station. There were some fair hunts to locate the mark. A few slowed to examine the decoys in the water, too.

All handlers sent for the right, retired bird second. Most dogs landed early, then searched the entire wooded section (about an acre or more) before recovering it. A few just slammed it, however. The left, retired mark posed most of the problems, in fact, all 9 handles occured on it. When sent, dogs would either try to return to the right shore or channel down the stream as if on a blind. One tried to return to the flyer. Handlers could only watch helplessly until their dog was in a position to handle to the left mark, For some it was their second handle, Again, a few did amazing work.

The eighth became history when the last dog, #29 was excused from the honor box. about 8:10 p.m.

Tomorrow is scheduled to begin with a land blind for the ninth and a set of land marks for test 10. Both will be held at new locations

There will be a caravan to the 9th from HQ