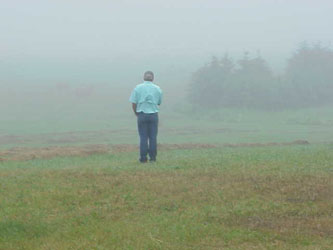 It was cloudy and humid with a good chance for rain again. There was little wind and a haze hung over the area. Temperatures were in the 70's at 6 a.m.. Upon arriving on site, a thick fog and light drizzle blanketed the series. Everything was put on hold until it cleared enough for the dog to see the handler. Finally, about 8:50 it had cleared enough and test dogs were called to the line to run a double land blind.
The line was in the same area it had been for the fifth test, but faced about 60 degrees to the right. It was in the same cut hay field dotted with large round bales. Near the center was a strip of evergreen trees running perpendicular to but not all the way to the line. Nearly straight away from the line a planter sat in a chair. A hay bale was about 30-40 feet to the left. There a dead cock pheasant was placed in front of the bale 75 yards out. Deep to the left  on the other side of the tree line another dead cock pheasant was placed behind the third of 3 bales that were parallel to and a short distance left of the tree line. It was 175 yards away. Handlers were  told they were "on their own" . The blinds were positioned in a push pull,  tight configuration.

Test teams ran at shortly before 9 a.m. with the first running dog, #6 arriving at 9:11. It took about 4 mpd to complete.

The close proximity to the planter and tight lines cause some dogs to flare and early adjustment casts were necessary.   A few seemed reluctant to go close to the near bale,  prefering to go on either side instead. Others "ping -ponged" their way to the far blind, while some nearly disappeared into the tree line. The test went quickly and was completed by 11:26 by dog #3.

Callbacks arrived swiftly and 34 dogs were invited to the Eighth. Those lost were: 29, 32, 52, and 59.
Test 8 - Water Quad with 2 Retired Guns as seen from line
Test 8 - Quad marks closer to show detail
A quick move was made back to the site of #3 for a water quad  with 2 retired guns.- test number 8. The site was a long, wet walk to a small pond area. In front of it was an weedy, overgrown cut corn field,  In the pond,  peninsula protruded from the far shore of the pond. . It was nearly across from the line and angled in. On top of it a set of guns stood and threw a dead pheasant to the right, across the water to the far shore. It landed at the edge of the water in some weeds about 175 yards from line. To the right and closer to line, another set stood on the near edge of the pond and threw a dead duck across a bay of water to the left. It fell in heavy cover on the far, elevated shoreline about 120 yard out. Still closer and  also to the right, a third set threw a dead duck angled sharply back to the left. It fell in a patch of tall grass 60 yards away. Far to the left, on the near side of the pond, a set of live guns shot a flying rooster to the left. it landed in the 2+ foot  sparse grassy cover 150+ yards away. The order was: Left middle; right middle ; far left flyer; right near mark. A dozen decoys rested in the water to the left of the peninsula. Also, there was an honor on the right.

As the dog was sent for the short right mark, the middle guns retired, leaving only the far left flyer guns in sight.

By 12:47 all was ready for the test teams. The first one handled on 3 marks while the second on only one. Judges decided they liked what they saw and called running dogs to the line. Dog 22 was first to run as #18 was not there yet. Handlers usually tried to pick up the outside marks first, then the shorter (right middle) third and the long (left middle) bird last.

The nearly over and under configuration of the right three marks, distance, cover and cross water throws, made it difficult for dogs to mark the birds separately. The out of order flyer broke their concentration and could dim the two remaining, converging  marks.  It took about 10 minutes to complete. Of the first four dogs, only one handled on the demanding. marks. As the test continued, the wheels first loosened up and then began to fall off. Dogs began to handle and pick up  - all marks seemed to cause problems. Several handled on the flyer. Others confused the two middle marks  and after recovering, one, would forget the other. A few returned to the short right mark and required handling. Several disappeared into the dense cover on the right, eventually recovering one of the retired marks. Of the 34 dogs called back, 14 handled and/or picked up - about 41%.The test ended about 8:16 when dog 17 was released from the honor.