Another huge THANK YOU to the throwers for yesterday’s work on the water triple – all of the handlers who step up to take a turn, committee members and to Matt Aiello and Alan Kennedy (Allan also planted the morning’s blind). The throwing has been as exemplary as the dog work, almost zero ‘no birds’ and not one dud popper; again, thanks to Dogs Afield for supplying them.

These factors along with Dennis Voight’s, Phil Macmillan’s and Ron Graham’s judging acumen, the handlers promptness and willing assistance, the exceptional dogs we have competing and the hard work being put in by the setup crew have all contributed to a tests that have gone smoothly and as quickly as possible. And, for a wonder, despite the sweltering weather and the increased nervous tension, everyone is still in good spirits.

The CNARC “Geek Squad” in the field, consists of myself, Lianne Ning, reporting, Myek O’Shea the photographer and Jan Graham our ‘editor’ and communications officer/’in the field’ web specialist. We have really appreciated the Ford Flex that was donated by Regina Capital Ford for the judge’s use. While they are judging, the Flex becomes our ‘office’. We would also like to extend our thanks to Tina Ebner and Mark Koenig of Retriever News who do the actual web posting, as well as the Regina Retriever Club webmaster, Jacquie Prentice, who has also been posting the evening reports. Isn’t technology wonderful?

Friday morning’s breakfast was pancakes, sausage and eggs, cooked in the field on a propane griddle supplied by A1 Rentalls and expertly cooked by committee member Paul James – hat’s off to the chef for cooking and to Purina for sponsoring the meal!

The morning is starting cool but is heating up rapidly, the forecast is fore 25*C today. It’s sunny and there is a slight wind at 15km/h from the northwest with occasional gusts. The dogs will be heading into the sun and the handlers will be looking down with the sun above and overhead. 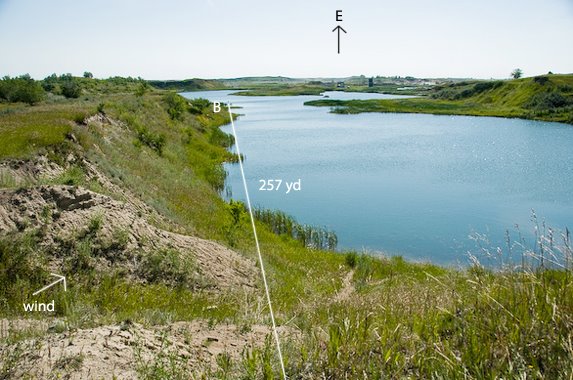 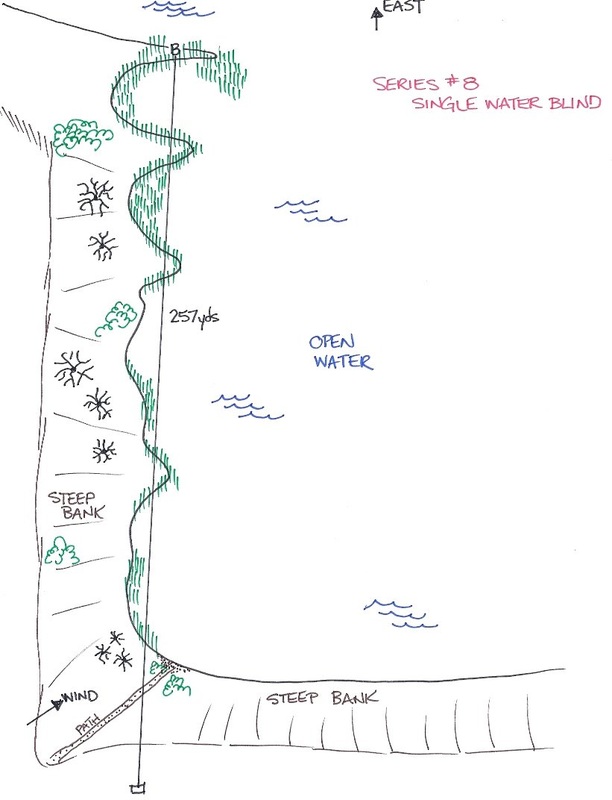 The test this morning is 257 yard single water blind with a tight, easterly line crossing land, water and reeds. The starting mat has been placed at the top corner of a high, steep bank. There is a definite path that angles to the right and down to the waters’ edge. If the dog takes the path, the line has been missed. A straight line will take the dog across the corner, across the path and down to the shoreline to the right of three small trees as a landmark. After entering the water the dog should swim parallel to the shore, close in to the reeds and cross the tip of the first point and re-enter the water to swim past the very outer margins of a small, reed bed and enter a short area of open water. The line leads to the next point. The dog crosses the point and traverses another, but larger, reeded bay to the next point. Crossing the point in line will bring the dog out the back side into another bay with reed-lined shores. Across the bay is a long, thin point well populated with reeds. The duck is planted at the far right end in the reeds.

At 7:40am the male test dog Bluenorth’s Alces Americana, owned and handled by Ed Zeerip, challenged the blind, followed by Marlene Benn with Fifth Avenue’s Rockin’ Reba as the female test dog. The judges had a short meeting and the third last point was then scented with a duck as an added diversion. The first dog to run series #8 is dog #22; Jazztime’s Trips Ink Spot, handled and owned by Ron Adlington.

There are a few new shirts to be noted this morning – the embroidered shirts from Tritronics are looking good. The handlers jackets and hats from Purina are getting a little worse for wear as the week progresses but who’s going to notice as the ante is upped and the final gets nearer. There is a bit of anticipation in regards to the finalists gifts from Duck’s Unlimited Canada.

At this point we would like to recognize the dogs and handlers that assisted the judges with the set-up this weeks’ tests: Ernie Rose with Bluegoose’s Mystic Creek Siren, Ron Graham with Long Meadow’s Whispering Willow, Circle C’s Buster Brown and Big Valley’s Haru Hunter, and Dennis Voigt with L&L’s Marsh Obsession.

There are a few more dogs to run the blind, callbacks when we get them. The test started at 8:10am and by 11:15am it was completed. There were a few dogs picked up and whistles were well used. Blinds well done were self-evident. It didn’t take the judges long to decide on callbacks. There are 13 dogs left to start the next series, a land quad in a field to the west of the water blind. 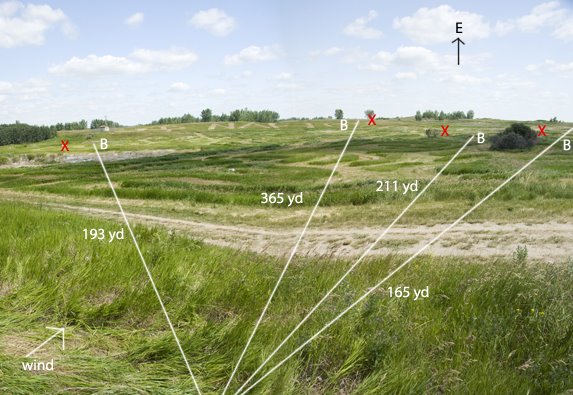 The weather has stayed as advertised, the temperature has risen to the forecast 25*C and the wind remains from the northwest at 15-20 km/h. A few clouds have moved in, but it doesn’t look like rain. The test is set in a huge, shallow vale with plenty of long grass that has been groomed in strips, some silver willow, a few wet patches of reeds, a marshy area and some stands of trees and bushes. The east side of the vale rises higher than the west side where the starting mat is set, the north side rises to meet the east ridge and the south side flattens out to undulating prairie. The test is set with the sun far to the right and moving to the back as the afternoon wears on.

#1 is the longest bird at 365 yards, from the center of the vale, down the west side, across the wide bottom and up to the crest on the east side. There is no vegetation larger than a patch of reeds that would be perpendicular to a straight line to the mark but the strips of uncut grass are very tall. Again, the strips challenge the dog to keep to a straight line and not take the path of least resistance. There are two tall trees visible at the crest and the duck, thrown right to left and square, lands slightly down from the crest, midway between the trees. The City of Regina worker who cuts the grass on our property has done so for many years and kindly helped us welcome the participants of the 2009 Canadian National Amateur Retriever Championship by mowing the letters “CNA FT 09” on the hillside.

#2 is a retired gun, 211 yards to the right of center in a southeast direction. The gunner retires to a blind behind a small stand of bush after throwing the pheasant left to right and back into the rear of a stand of tall grass. The line to the mark heads downwards and cuts between the small brush shielding the blind and a larger stand of bush and small trees that lies ahead and farther to the south. As always, the sculpted field provides an added challenge.

#3 is the right hand station and is semi retired. The gunner is visible for the throw which is left to right and back. The duck lands 165 yards away in the long grass and the gunner sits, facing the bird, behind the bush. The line takes the dog down and to the right of the bush and trees and the gunner is visible to the dog when the stand is cleared. The strips of mown grass angle in all directions across the line and will entice the dogs to leave the line.

#4 is the far left station with a duck being thrown from left to right into a natural patch of long grass at 193 yards. The line heads down the west side of the vale, crosses a marshy body of splash water on the way to the bird. The few mowed areas in this section of the vale are perpendicular to the line and the horizon behind the throw is a large stand of poplars.

The male test dog was Revilo’s Stormin Normin owned and handled by Jim Borsberry. Toby went long on the #2 bird but returned on line to pick up, he was unable to complete the pick up of #4 due to the heat. The set up crew has gone for the wading pool and water while the female test dog runs. Ron Adlington had Jazztime’s Trips Ink Spot does the marks and she required handling on the 4th bird. The 9th series started at about 1:30pm with the first dog being #33 Jazztime Last Chance V Pekisko handled by Larry Calvert, owned by Larry and Anna Calvert.

With the outstanding throwing and gunning of Alan Kennedy, Matt Aiello, Gord Benn, Bobby Lindsay, Jim Couch, Mickey Rawlins, Jim Ling and the Purina rep Les Oaks, the series is complete at 4:15pm with not one ‘no bird’(must have been because of Les). The majority of dogs required handling on the long #4 bird with a few exceptions and there was one or two excellent completions of the entire test.

The tenth series is rumoured to be a water test at the Botkin’s property and it doesn’t appear that the tests are getting any easier. Good luck to all our competitors!