Conditions for the water blind today were more favorable, especially the lighting. Even though the wind had picked up, most handlers were able to cast the dogs off the points. The test resumed with dog number 37 as the first running dog. There was a higher ratio of success.

The water blind concluded at 10:25 AM. Temperatures had climbed to 28 degrees by then, expecting to get hotter in the afternoon. 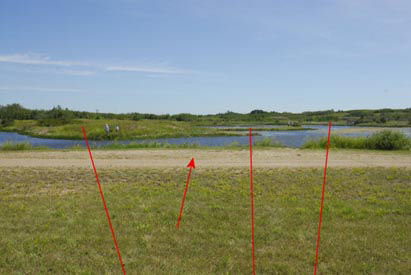 Dog number 14 was called as the first running dog at 12:12 PM. The test was taking about 15 minutes per dog.

At first, it appeared that the only problem bird was the long retired, as there were a few handles on it. Then, the middle mark started coming more into play as dogs were missing it and going long. Then the handlers had to put them back into it. Dogs seemed to be confused between the right side of the middle mark and the long mark, which is where a lot of problems occurred

In all, there were 12 handles and a couple of double-handles

Tomorrow, a land quad is expected for the ninth and then a water quad. Temperatures could become an issue, as they are climbing with the high pressure system that is sitting over the area right now. 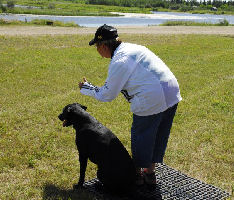