After a  rain Tuesday night, Wednesday was a clear cool day. The 5th series is a water triple, run from close to the same line as the fourth series, but the opposite direction, facing a long narrow pond.  An in line triple with all birds thrown to the left.  The right hand gun, at 200 yards, was first with a hen duck thrown from a slight elevation above the water down into the pond, and then retired.  The middle, number two gun station, at 180 yards, was located on the far bank of the long narrow pond and thrown square up hill at at the flyer station.  The flyer, at 200 yards, was shot last, from low brown cover into well grazed green cover.  The first test team, of Alice and Sniper, was run at 6:50 A.M. They handled on two birds.  After minor test changes Jewell and Thunderbolt picked up the birds without a handle.  Number 48 started at 7:28 A.M.

Of  the 62 dogs called back 6 had handled in a previous series. Dogs had trouble with all three birds and took them in ever possible order.  Before the first gun change 19 dogs had run and 9 handled.  After the gun change 6 more out of 10 had handled.  The middle bird caused the most trouble.  Early wind was from right to left but soon changed and blew from left to right or from left and toward the line.  Later dogs could wind the middle bird from behind the gun, but that often threw them off line to the retired right hand bird.  It is not likely that the test will be completed today.  The wind blowing in the gunners faces caused several no birds.  Retrieval of the right hand bird in the water was slow during no bird situations.  The test took between 9 and 10 minutes per dog. Chief Marshal Kirk Naisbitt predicted there would be about 3 dogs left to run in the morning.  He stated no partial callbacks will be given.  If they finish, callbacks will be posted this evening.

Comments on the trial:
"Set up was great, the judges get along very well and all tests have been set, with the gallery location in mind". Tony Snow - President of the National Retriever Club.

Comments about the First and Second Series Combination Land Marks and Blind:
"This is the first National Open that I have seen a blind run before all of the birds of the marks were retrieved".  Nelson Sills - Spectator and handler/owner of a  past National Amateur Champion..
"When I first saw the test I  thought the blind would cause a lot of trouble with the sort retired gun but it didn't seem to bother my young dog at all".  Jack Vollstedt - Contestant
"Vollwood's Molly did a great job.  Best job of the early dogs.  A beautiful opening test with good use of the terrain".  Charlie Hill, only handler to win the National Open, National Amateur and Canadian National in a twelve month period with one dog,  Wanapum's Dart Dandy.
"Those are the biggest, toughest pheasants I have ever seen. They were biting me on the fingers".  Gary Zellner - Thrower
"I thought they would have more trouble with the short retired gun.  They made up for it with the blind, it provided many answers".  Larry Culvert - Contestant.

Comments on the Third Series Water Triple.
"That bird we missed went into the sun and zinged just as I shot, I don't know how I missed it".  Dave Vega - Contestant and Gunner.
" Not one dog went behind the right hand gun and hunted, on Monday, but a few have already hunted there today (Tuesday)".  Alice Woodyard - Field Trial News Reporter and Test Dog handler.
" I hope this is their worst test".  To remain anonymous.

Comments on the Fourth Series Water Blind.
"This test is only going to take 4 minutes and get all of the answers they want". Gray Snipes - Co Chairman of the Marshals
"The fastest blind was planted in 44.6 seconds".  Jewell Easter a Marshal at the 4th series.
"Of the 77 dogs to run the blind, 15 had handled on marks in the previous series".  Jewell Easter.
"You should have seen Code Blue's blind.  It was something to see".  Gray Snipes - Co Chairperson of the Marshals.
"The wind and the person in the chair had the greatest effect on the blind".  Pat Burns - Professional Dog Trainer.
"My wife said they are saying nice things about us on the internet".  Cliff Garland - Judge
"Lynne DuBose is in the holding blind without any whistles". A Marshal to Mike Larry just before she was to run the blind.

Update on Test Five
Four dogs remained to be tested, Thursday morning, on the water triple.  Dog 42 was the last dog to run and absolutely pinned the test.  Dog 2 did not handle but after 4 excellent series had two hooks behind the right and middle guns.  At the completion of the test the Judges plan to run a land quad.  Updates and callbacks will be posted tomorrow morning.
Land - Water Triple
Fifth Series 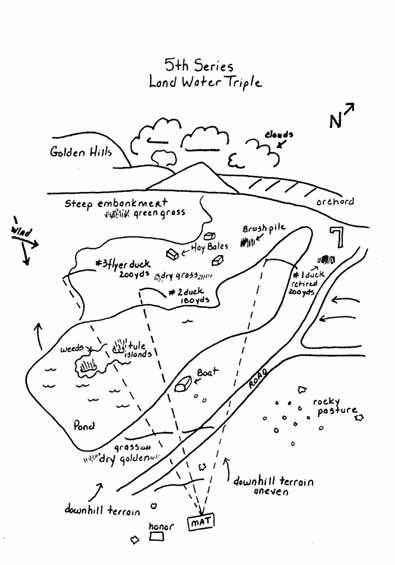